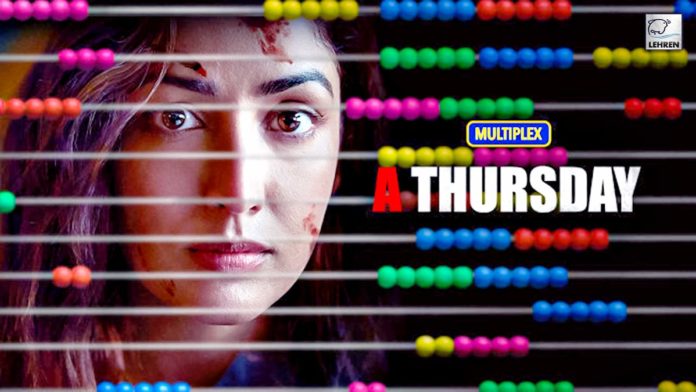 A Thursday is a drama thriller film starring Yami Gautam, Neha Dhupia and Atul Kulkarni. Directed by Behzad Khambata and produced by Ronnie Screwvala, the film will start streaming on Disney+Hotstar on 17 Feb.

There’s a line that Naina Jaiswal (Yami Gautam Dhar) hisses at Prime Minister Maya Rajguru (Dimple Kapadia): “People listen only if you scream in their ear.”

Vijay Maurya’s dialogue answers the bafflement over why playschool teacher Naina holds 16 of her own little kids as hostage. Or why she insists on ‘super cop’ Inspector Javed Khan (Atul Kulkarni) being called in as the negotiator.

Written and directed with effective competence by Behzad Khambata, what Naina wants from leaders, cops and other figures of authority unfolds with every progressive demand from her. Khambata and fellow-screenplay writer Ashley Michael Lobo guide the hostage drama through a maze of issues without preaching or complication.

Police preoccupation with VIP cases that fetch them a medal on the chest, frustrating traumatised, lesser-known families✔

The one-upmanship within the force that could jeopardise an operation✔

“A woman,” say it, pushes PM Maya Rajguru. And, in a concise, well-delivered voice of authority, Dimple rasps, “Because you’re a woman, a mother, a grandmother. Well, emotions can sometimes be an asset. And don’t you ever override me. I’m not a puppet.” This deserves a ✔✔

In a tightly told drama that touches on many raw, relatable nerve points, there isn’t any moment where you feel it needed to be snipped. Editor Sumeet Kotian may take a bow for keeping it economical with to-the-point clarity. Cinematography (Anuj Rakesh Dhawan, Siddharth Vasani), pouring rain (mausam aur mahaul) and the background score (Kaizad Gherda) further aid in creating this gripping piece of cinema that packs in so much, so simply and in so short a time.

Neha Dhupia (as pregnant ACP Catherine Alvarez) and Atul Kulkarni, with their own personal and professional undercurrents, lend sturdy support to a structure that rests on the slender shoulders of Yami Gautam who switches from being the favourite teacher of the kids to the maniac who’s holding them hostage to the vulnerable woman who has a reason for never wanting to celebrate her birthday. Dimple Kapadia brings dignity to her stride and makes the Prime Minister human yet authoritative.

Like Naina Jaiswal’s fiancée Rohit Mirchandani (Karanvir Sharma) does in the film, here’s a salute to both women.

Watch the trailer of ‘A Thursday’.