Gehraiyaan Review: BANG MY BRAINS OUT 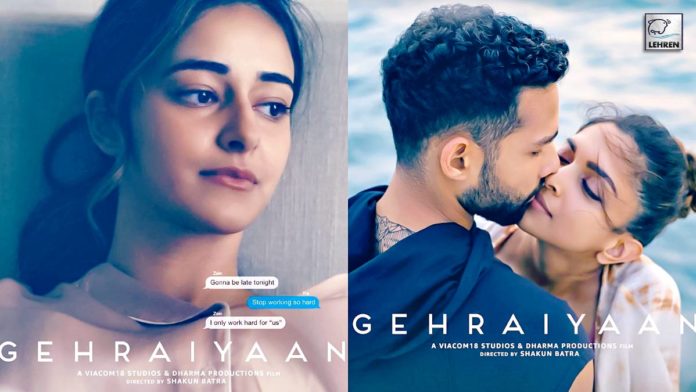 Sometimes, a film starts off with great promise and then peters out.

When Alisha Khanna (Deepika Padukone) has a torrid affair with Zain (Siddhanth Chaturvedi), it begins with a disconnect. Okay, you’re bored with your yoga app being rejected by investors. You have a troubled equation with your father (Naseeruddin Shah) in Nashik and you’re having more tiffs than sexual bouts with six-year live-in partner Karan (Dhairya Karwa). So when you’re physically attracted to the man your rich, unsuspecting cousin Tia (Ananya Panday) is in love with and has introduced the family to, you do what’s ethically incorrect.

We’ve seen forays into such forbidden relationships before. Like Onir’s Sorry, Bhai! where Sharman Joshi falls in love with his brother, Sanjay Suri’s fiancée played by Chitrangada Singh. So that part isn’t startlingly unexplored territory. But the disconnect is because neither Shakun nor his screenplay colleagues Ayesha Devire Dhillon, Sumit Roy and Yash Sahai, build a palpable chemistry between Alisha and Zain before they plunge into sneak texting and ecstatic (though overdone) physical intimacy. Zain is neither the charmer who can sweep a woman off her feet nor are there any moments when he does or says something that could make Alisha fall in love with him. It therefore comes off more as bored indulgence than the coming together of two people drawn magnetically and irresistibly to each other. In fact, Zain flirting with Alisha from the word ‘go’, right under his girlfriend and her boyfriend’s nose, is more a put-off than a gesture that would flatter a young woman to start dimpling with pleasure.

That early disconnect gets compounded when Zain two-times both cousins with a web of lies. Somehow, his financial difficulties due to which he continues to bed Tia instead of breaking off with her seem flimsy and instead of drawing sympathy, Zain just looks creepier. A flawed hero is perfectly acceptable but you don’t empathise with any of the three main characters.

Doesn’t Alisha get it even when Zain funding her yoga app and studio run into rough weather?

And what makes Tia so unintelligently innocent? In one scene, when he’s clearly the cheat on all fronts and he charges Tia with not trusting him, the writers have her apologising to him the next day. Batra and his team stretch the two girls’ blind love for the same cad to incredulous limits especially when all else is supposed to be so contemporary. For example, educated, rich girl Tia is so naïve, she’ll sign away her bungalow without reading it, keeping a copy of it or letting her lawyers vet it.

When there’s a scam being aired on prime time, both women and people around them stay clueless. Clearly, Batra has his hero banging the brains out of his two women. That’s not today’s woman. Living-in, pre-marital or forbidden sex are not enough to make a modern woman. Please spare her a few grey cells too.

Oh, and by the way, educated, pregnant women don’t usually have a drink, okay?

Batra’s narration labours to drive home the message that humans make mistakes and they must pick themselves up and move on. I say ‘labours’ because the route taken is strewn with moments that either don’t stir the viewer or come packed with metaphorical cliches like waves crashing.

The dialogues too (by Yash Sahai and Ayesha DD) aren’t refreshing. Alisha says “Nice” half-a-dozen times, everybody feels “stuck” in yuck situations and wit comes from antique puns on ‘sleeping partner’ or a line on ‘pottery class and potty training’.

After all this, when there’s a final twist in the tale, the story begins to pick up, offers a glimpse that links the past with the present, and finishes with a nice little teaser.

Deepika Padukone is at ease as Alisha but we’ve seen her as the casual modern woman earlier too, as in Love Aaj Kal. Siddhant Chaturvedi is a competent actor but he doesn’t have the natural charm to carry off a user with a swagger.

Batra and co are fortunate that they’re on an OTT platform where the audience won’t get up and go home before the interesting part chugs along.