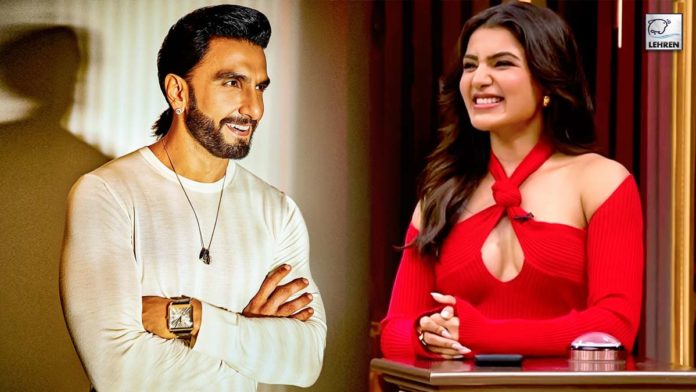 Bollywood actor Ranveer Singh landed in a legal case post his nude photoshoot. Several actors stood in his support for taking his call on the viral photoshoot. Meanwhile, Ranveer Singh reacted to compliments he received from Samantha Ruth Prabhu on the couch of Koffee with Karan.

This season of KWK is brewing some interesting pairs and confessions. So far Ranveer Singh, Alia Bhatt, Janhvi Kapoor, Sara Ali Khan, Akshay Kumar, Samantha Ruth Prabhu, Vijay Deverakonda, and Ananya Panday have graced the couch of popular celebrity talk show. When the Oo Antava fame featured in the 3rd episode of the chat show she gushed over Ranveer. In every Rapid fire round she was quick to name Ranveer in her answers. The South diva further went on to say that she has been ‘ranveerified’.

Ranveer Singh praised Samantha as a wonderful person reacting to her comment on Koffee with Karan 7. He said: “I think she is a wonderful person, a very warm person, lovely energy and an immensely talented person. We did an ad together, that’s where we actually met and engaged for the first time and it’s on that on that day that she said ‘Hey, I am actually going to shoot Koffee With Karan tomorrow’.

The Bajirao Mastani actor also disclosed that he would want to work with the Jaanu actress. He went on to add: “I appreciate her as an artist immensely and even more so as a person, even one to one she is so lovely, she’s so warm, she’s light-hearted. she’s humorous. I think before Alia and I did Gully Boy together if I am not mistaken, we met on MakeMyTrip together for the first time. Samantha for instance hopefully I’ll do a full-fledged feature film with her in the future, we met on Vicks on the first time.”

On the work front, Ranveer Singh will be next seen in Rocky Aur Rani Ki Prem Kahani. He reunited with his Gully Boy co-star Alia Bhatt. Helmed by Karan Johar, Rocky Aur Rani is touted as a family entertainer starring Dharmendra, Jaya Bachchan, and Shabana Azmi as well in prominent roles.