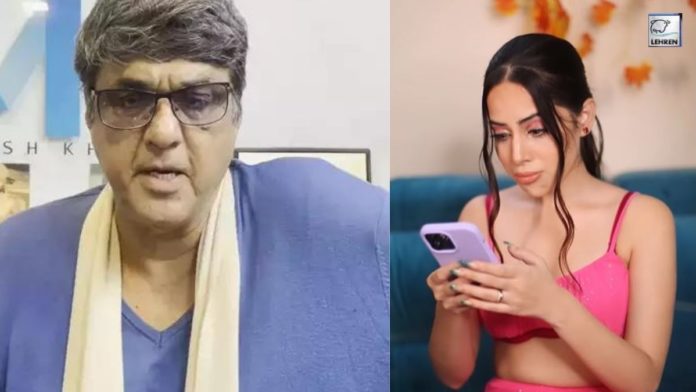 Check out how Urfi Javed reacted to Mukesh Khanna aka Shaktimaan's viral video where he made a controversial remark on women.

Veteran actor Mukesh Khanna, best known for playing Shaktimaan, and Bhishma Pitamah in Mahabharata, is currently in news for his controversial remark on women. A short clip of him is going viral on the Internet where he can be seen saying “Koi bhi ladki agar kisi ladke ko kahe ‘I want to have sex with you’, wo ladki, ladki nahi hai, wo dhanda kar rahi hai (girls who desire sex and ask for it are sex workers).”

As the video went viral, Mukesh Khanna was brutally slammed by both genders. However, some netizens defended him after watching the full video. Mukesh Khanna posted a video on his YouTube channel called Bheeshm International. The video is titled “Kya aapko bhi aisi ladkiya lubhati hain?” (Do such girls lure you as well). In the video, Mukesh talked about how some unknown girls chase men on social media and offer them sex. With his video, he tried to spread awareness amongst boys. However, the video backfired due to his certain statements.

Internet sensation Urfi Javed, too, is unhappy with Mukesh Khanna’s viral video. She took to her Instagram story today and shared a post uploaded by social media page bebadass.in. It reads, “The fact remains that he did say “that any woman who approaches a man for sex is a prostitute” and that girls belonging to civilized society would never approach men for sex. He did say it, no matter what the context!”

“Over the years people and lawmakers have gone back and forth about sex work. But when it is the livelihood of a person, comments like his can further lead to stigma and criminalization, striping a person of their means of living,” it further says.

Mukesh Khanna played the title role of Shaktimaan, India’s first superhero show, which aired on Doordarshan from 1997 to 2005. He was idolized by the kids during the 90s.