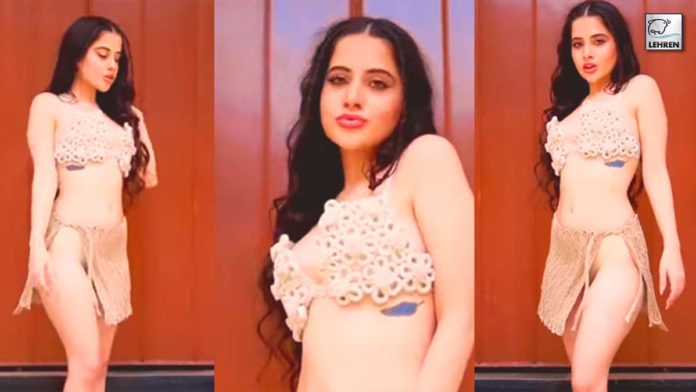 Yet again Internet sensation Urfi Javed is making headlines for bold fashion choices. On Friday, she dropped a video of herself wearing a high-slit jute handmade skirt and a bralette top. The actress shared her look on social media and netizens are now sharing their views.

Urfi can be seen wearing a high-slit short skirt made out of jute and a bralette white top finishing her look with open hair the actress posed in her outfit and shared it on her Instagram. According to her, it took her about an hour to make the skirt. Sharing the picture Urfi wrote, “He baat toh sach kahi Jasmine me mere baare me ! We made this too and skirt literally in one hour . Yes we made it !!!”

Reacting to her look, netizens posted their reactions on the internet, as a user wrote, “Fashion ke naam pe kuch bhi”, “Pse ke lie nangu hona jroori h ky”, “Allaha ko kya jawab do ghi”. The netizens seem to have not been liking her over exposive dress.

While Urfi, on the other side, really doesn’t get bothered with what society has to say about her fashion looks and her. Recently the actress was spotted at the airport wearing a customized T-shirt that reads, “Other celebrities dress classier than Urfi tho. Well then, f*ck them and f*ck you too.” Urfi Javed flaunted her backless avatar of the shirt as she posed for the paparazzi, showing her middle finger to the camerapersons and many found it disrespectful.

The actress rose to fame after participating in Karan Johar’s Bigg Boss OTT and ever since then the actress grabbed the headlines for her sartorial picks and peculiar fashion sense.

ALSO READ: Netizens Get Shocked As Urfi Javed Gets Papped Wearing A Saree