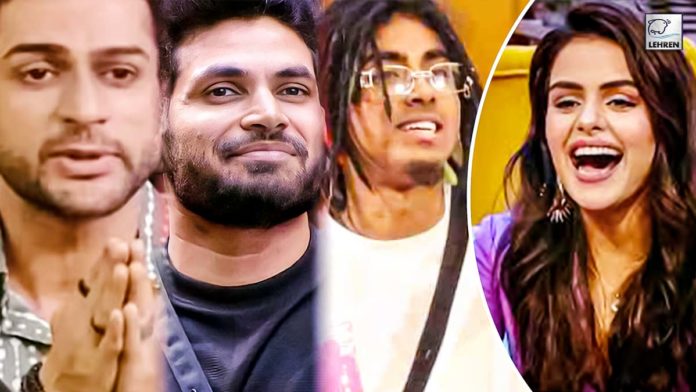 Stan and Shiv playing along with Priyanka!!

Bigg Boss 16 is getting day by day closer to its finale. As the days are passing by Bigg Boss inmates are getting ready to face the finale. As we know that Shalin and Tina are not on talking terms; Shalin is facing issues in the house. Shiv and Stan are faking a friendship with Priyanka.

Nobody is now talking to him and he is starting to feel claustrophobic. He is talking Shivand Stan that he wanted to talk to Priyanka she says- I’ll think about it and when he passes by Tina is laughing at him. He is asking them to nominate him as he can’t take it anymore.

Priyanka is seen saying Karma is playing, and Nimrit says that he is now playing a victim card.

As the new week begins, Shiv, Priyanka, and Stan are suddenly seen on talking terms. Priyanka says to them that you people must be missing the chawl life. Shiv also replies that he misses that and loves it. Both Stan and Shiv loved that time.

Later in the kitchen, Stan is washing the dishes and Priyanka says- You must be thinking how I came here and now humorously washing dishes but Stan doesn’t say anything and say it fine.

Later Stan and Shiv are conversing that Priyanka said these things and trying to be over-smart. Shiv says that she now trying to make things heat up and creating a mess but will also play through it.

Now let’s see who will be the target of eviction and who will win a Ticket to Finale and joins Nimrit.