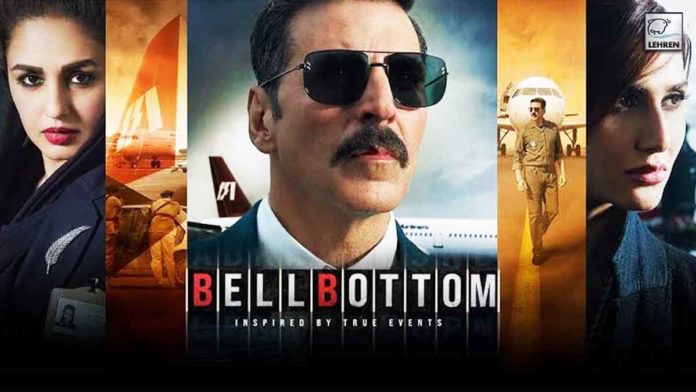 We all love listening to untold stories of unsung heroes. Therefore, when an Indian Airlines flight was hijacked, purportedly by an Azaadi gang of Sikhs (though they’re not specifically identified), and a RAW analyst turned agent to thwart Pakistan’s insidious plans, we’re happy that his mission was filmed for posterity.

Increasing ransom demands of money and freeing terrorists have been consistently complied with by the Indian state with Pakistan playing good neighbour to negotiate terms with the hijackers. That’s the pattern various ministries, all trying to pass the buck for the hijack to one another, want the Prime Minister to follow this time too.

But Indira Gandhi is ballsy enough to place her trust in Bell Bottom, the RAW agent whose existence she knew of barely two minutes ago. Convinced that the Azaadi gangs are puppets in the hands of the ISI, the real players behind the scene, Bell Bottom would rather keep Pak out of it and go for a rescue mission. To let the plane fly out of Pakistan to the Middle East, and put in place a plan to bring back the passengers and the hijackers.

Dubai has a ‘no bloodshed on our soil’ policy, and insist on the safety of passengers as priority over all else.

A Jaichand around the mission in Dubai further complicates Bell Bottom’s plans.

But Bell Bottom is a chess player, a linguist, a music teacher and, after RAW put him through the grind, he’s in fine physical shape too.

Thinking ahead, with several Plan Bs in his mind, he pulls it off. I’m not sure if the description given by boss Santook (Adil Hussain) is fitting when he compares RAW with a dog that does its job from behind, pulls out and slinks away leaving the female pregnant. The female doesn’t know what he looks like. RAW is like that, we quietly go in and come out and nobody’s the wiser but the job gets done, says the boss.

That’s why the world didn’t hear about Bell Bottom’s daring mission that brought back to India, passengers, terrorists and hijackers, all intact.

Great story but best watched on OTT where the completely inane meanderings of director Ranjit M Tewari and writers Aseem Arrora and Parveez Sheikh, may be fast-forwarded. Instead of focusing on telling this heroic tale, there are flashbacks to show Anshul Malhotra wooing and wedding Radhika, the love of his life (Vaani Kapoor). There are two long flashbacks with songs for this which also bring in his mother (Dolly Ahluwalia) and his teary relationship with her. He weeps when she goes to London to her other son for a while, he weeps when he remembers her years later at a gurdwara in London (flashback again), the emotion wrung out till it irritates. There has to be another flashback on how he got into RAW and his training. All mandatory and dull writing that can be watched in fast forward.

The best part of the film is the last scene with his wife on the phone. That’s where Akshay Kumar’s real heroism stands out. He’s not afraid of woman power.