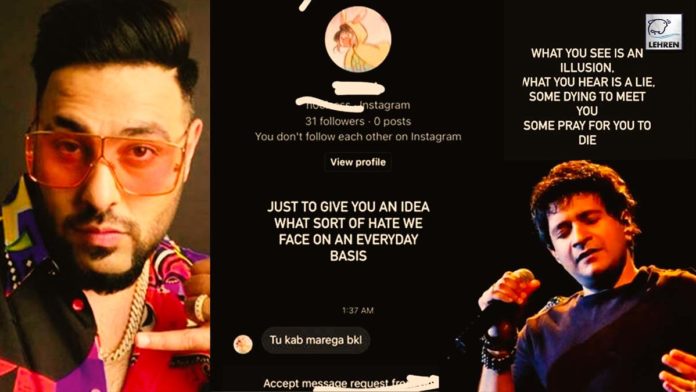 After KK's death, Badshah receives hate messages from netizens and shares the screenshot on social media.

After the untimely demise of Bollywood singer KK, rapper Badshah has recently received hate messages from netizens asking him when he will die. To this, the Bollywood rapper-artist responded to the trolls by sharing a post on his Instagram addressing the haters.

Soon after the news of KK’s death surfaced, several celebrities paid tribute to the singer. The list included the Bollywood rapper Badshah as well. The singer took to his social media to share his grief and loss of the legendary singer KK. The singer shared a picture of the singer and wrote ‘Why?’ with a broken heart emoji. However, soon after his post, the rapper received a hate message from an Instagram user.

Taking to the social media, Badshah dropped a screenshot of the abusive message which read, “Tu kab marega…”. Sharing the post, the rapper wrote, “Just to give you an idea what sort of hate we face on an everyday basis.” In another Story, Badshah continued “What you see is an illusion, what you hear is a lie, some dying to meet you, some pray for you to die.”

Bollywood singer KK passed away on Tuesday 31 May. The sudden demise came as a shock to his fans and the Bollywood industry. While KK’s death is survived by his wife Jyothy and two children, Nakul Krishna Kunnath, and a daughter, Taamara Kunnath. Many Bollywood singers gathered at his funeral on Thursday bidding farewell to the artist.

On the work front, Badshah featured Tamannaah Bhatia in his latest music video ‘Tabahi’. He was also seen alongside Kangana Ranaut in the song ‘She’s on Fire’ from the film Dhaakad.