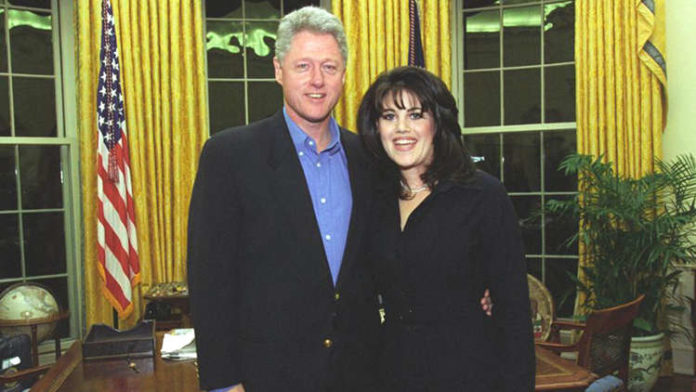 Former US President Bill Clinton claims to have an affair with then-White House intern Monica Lewinsky because it helped him ‘manage his anxiety’. Clinton made these assertions in the latest documentary series titled Hilary, where the former First Lady and Secretary of State candidly revealed that after the outcome of the scandal, the couple went through excruciating marriage counseling.

The infamous scandal came into limelight after a news aggregator laid allegations on Lewinsky of having a sexual orientation with the former president; the story was later picked up by major publications.

In 1997, Monica confessed to engaging in sexual encounters with Bill on nine occasions and later in the year 1998, a blood sample was taken from Clinton for DNA, against stains from Lewinsky’s dress. Although during the early Interviews, Bill along with Hilary denied all the allegations but later when it was proven true, Clinton admitted to ‘inappropriate intimate contact’ with Monica.

Bill further claimed that he even denied to Hilary that he was physically attached with the intern, and she believed him when she came to know, she told Bill he should confess this to their daughter Chelsea as well, who was 18 at the time, revealing the moment, Bill said, ‘it was worse than telling his wife and he said that doing so was awful.

While addressing the nation, Clinton admitted that he was indeed in a relationship with Monica. While talking about their affair in the documentary, Bill apologized to Lewinsky and felt terrible that her life was defined by their affair.

The scandal led to Bill’s impeachment in 1998, but the trial was in his favour, so he remained in the office for the second term. Post his impeachment, a prominent journalist named Lucinda Franks had claimed that according to Hillary, Bill was abused by his mother, as a child, which caused him to become a sex addict.

Even though he had talked about the case back in 2018, but in the Hulu’s documentary, the former president gave an extensive view on the scandal. While talking about the documentary to a leading daily, Hilary revealed that ‘she signed up for it because I’m not running for anything’.