Chiranjeevi Talks About Choosing Salman Over Aamir Khan For ‘Godfather’ 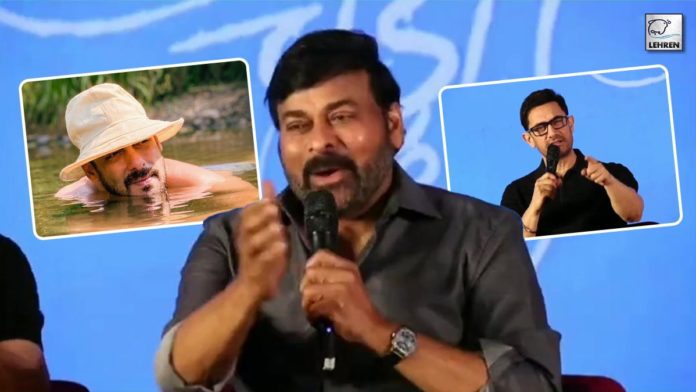 South superstar Chiranjeevi opens up about choosing Aamir over Salman for 'Grandfather', and says, 'we needed someone for their physicality'.

South actor Chiranjeevi was recently invited as the chief guest at the Telugu trailer launch of Aamir Khan’s film ‘Laal Singh Chaddha’. Meanwhile, during the event, Bollywood actor Aamir Khan went out and questioned Chiranjeevi on why he didn’t approach him for a cameo in his film, Godfather. To this Chiranjeevi said, ‘we needed someone for their physicality, and that’s why we went with Salman’.

Recently during the Telugu trailer launch of Aamir Khan’s film ‘Laal Singh Chaddha’ South superstar Chiranjeevi was asked by actor Aamir Khan on why he didn’t approach him for a role in his film Godfather and went with Salman Khan instead. Aamir said, “You see I was telling Chiranjeevi that ‘please allow me to do something for you’. Then he said, ‘I will call you’. And two days later, he told me that, ‘I was shooting with Salma and he was telling me something about the movie’. Then I asked him, ‘You didn’t call me. You call Salman?”. Reacting to this Chiranjeevi said, “The role was not about heart and brain, it was about physicality. So we opted for Salman.”

Meanwhile talking about Aamir Khan, Chiranjeevi said “Aamir Khan is one actor who impresses the audience with his experiments. Aamir Khan is the finest actor in our country and he is an asset to Indian cinema. I feel it as a privilege to present the film. He told about the Forrest Gump remake in 2019 during our visit in Japan. Aamir Khan is a perfect fit for the role. Aamir Khan is the Tom Hanks of India”.