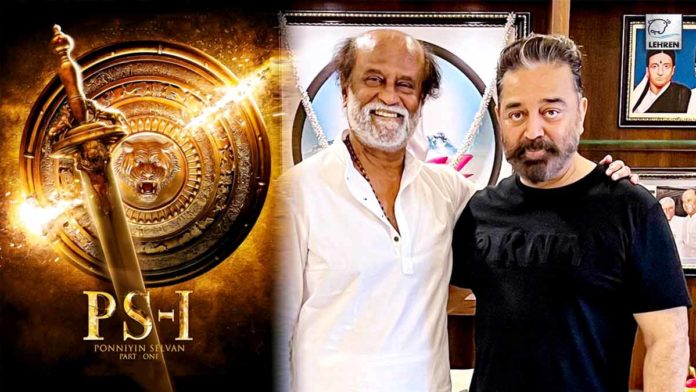 Ponniyin Selvan had a trailer and music launch in Chennai on Tuesday. Mani Ratnam’s directorial is absolutely a much-awaited film of the year featuring Aishwarya Rai Bachchan in the lead role. Ever since the first look and teaser were unveiled the film created much buzz among fans. During the trailer launch in Chennai, Kamal Haasan revealed that he wished to make Ponniyin Selvan starring Rajinikanth.

Kamal Haasan and Rajinikanth both attended the PS 1 event as chief guests. Both hugged and the crowd roared as the two greeted each other. At the event actor and filmmaker, Kamal Haasan disclosed that not just Mani Ratnam but even he wanted to make Ponniyin Selvan. The megastar had planned who he will cast in the titular role. Haasan mentioned he desired to cast Rajinikanth to play the lead role.

During the event, Kamal Haasan said, “When I got the rights of Ponniyin Selvan, Sivaji also said that Rajinikanth would be perfect for Vandhiyathevan. I asked him ‘what about me?’, Sivaji said ‘you be Aditya Karikalan’.”

PS 1 Ponniyin Selvan is an official adaptation of a historical fiction novel in the same name. Ponniyin Selvan novel is written by Kalki Krishnamurthy in Tamil. The film stars an ensemble cast of Vikram, Aishwarya Rai Bachchan, Jayam Ravi, Karthi, Trisha, and Aishwarya Lekshmi, among others.

On the work front, Kamal Haasan is working on Indian 2 after the film was put on hold for 2 years. During the last shoot, an accident occurred in which three crew members died and 10 were injured. Post that lockdown was imposed due to a global pandemic. However, the project is back on floors and is expected to be completed by 2023.