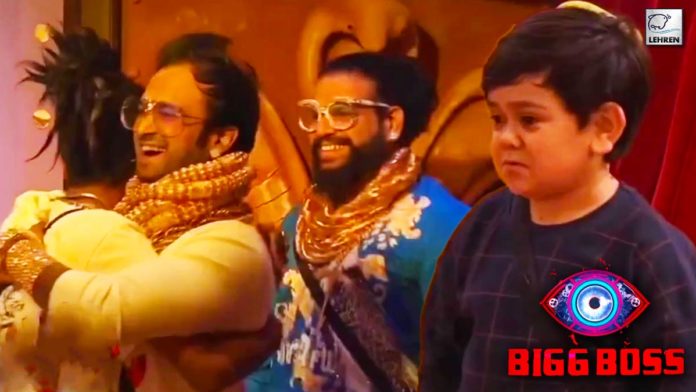 Golden Guys Sunny Nanasaheb Waghchoure and Sanjay Gujar enters the show with an opportunity for the contestants to recover their lost 25Lakh rupees.

Nimrit Kaur Ahluwalia is the new captain for this week. In the latest episode, the Chhoti Sardaarni actress was seen fulfilling her duties as she allotted the rooms to every housemate.

As always Archana Gautam was again seen making a fuss in the house over “food”. But this time Archana locked horns with her own friend Soundarya. Archana creates a ruckus after her food gets swapped with Sumbul she further states that she can’t eat stale food. Soundarya gets irked and says that she can’t take her tantrums anymore.

Later Bigg Boss welcomes the first ever wild card entry of Bigg Boss 16. Sunny Nanasaheb Waghchoure and Sanjay Gujar enter the show with an opportunity for the contestants to recover their lost 25Lakh rupees. MC Stan gets elated with the entry of Sunny and Sanjay. The wild cards get allotted room no. 2 with MC. MC later discusses that he isn’t cut out for a show like Bigg Boss.

On the other hand, Shalin was seen getting irked after Soundarya, Tina and others made fun of him saying that he is too obsessive about Tina. Shalin then confronts Tina personally and states that he doesn’t have any feelings for her. Shalin then claims that he will restrain himself from making jokes about their relationship since it gives out a wrong message.

Later Nimrit calls everyone to the living room and tells them that from now on she will start giving punishment if anyone disobeys their duties. Nimrit then states that the whole garden area was dirty with cotton balls left in the mug, and leftovers of vegetables in the kitchen. Following the same Archana gets into an argument with Nimrit saying that she hasn’t left any cotton outside in the garden area. Shiv tries to pacify the situation as he tells Archana to stop butting in.