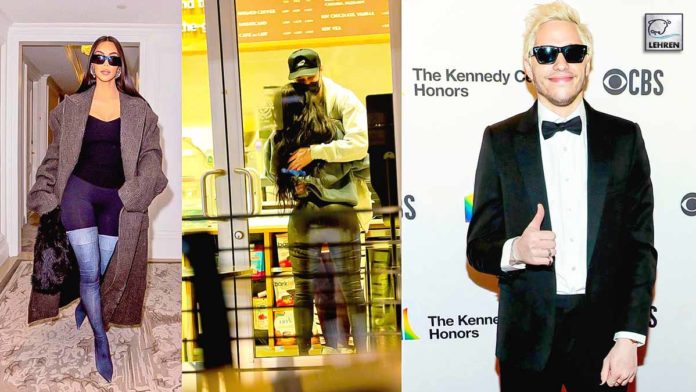 SNL star Pete Davidson was dressed casually in baggy clothes as he held Kim's hand as the couple left through the back entrance.

Kim, 41, was looking stunning with a mask and oversized sweater, as she showed off her famed derriere in a pair of tight-fitting leather trousers for the casual date night. While inside, the loved-up couple tucked into two large pizzas and a salad and sipped on Diet Coke as they sat opposite one another on a small table, mixing in with an unassuming crowd, as per DailyMail. Meanwhile, a source present at the restaurant tells the outlet, “It was a very casual date without much flirting. No-one in the restaurant barely noticed them and Kim was on her phone at one point.”

SNL star Pete Davidson was dressed casually in baggy clothes as he held Kim’s hand as the couple left through the back entrance. The celebrity couple appears to be going from strength to strength in their relationship, just like Kim’s ex Kanye, 44, with whom she filed for divorce in February last year. Kanye Ye West sparks up a new relationship with actress Julia, 31.

But while both Kim and Kanye seem to be moving on, there have also been recent reports that Kanye is still pursuing Kim, and had even tried to follow her over the Christmas period, forcing the reality star to change her vacation plans at the last minute. Kim and Kanye share four children together which they are currently co-parenting, North, Saint, Chicago, and Psalm.

For the most part, their divorce has gone smoothly, and the former couple had been acting cordially towards each other this past year. There have also been reports that Kim Kardashian is happy that Kanye has found a new love interest in Uncut Gems star Julia, giving the relationship her full blessing. In contrast to her low-key romance with Pete, Kanye has been showering Julia with gifts.

Check Out the Photos of Kim Kardashian and Pete Davidson Date Night Here: