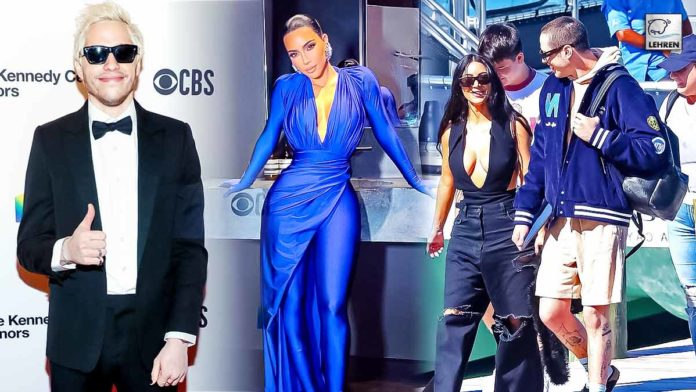 Kim Kardashian put on a hot display as she and her boyfriend Pete Davidson boarded a boat during their romantic outing.

Kim Kardashian put on a sizzling display as she and boyfriend Pete Davidson boarded a boat during their romantic getaway to the Bahamas. The 41-year-old reality TV star was captured walking beside the 28-year-old SNL funnyman in a plunging black bodysuit that highlighted her ample cleavage. The reality star accessorized her look with a pair of black sunglasses and a fuzzy black clutch.

Meanwhile, an obviously smitten Davidson had a huge smile on his face while chatting with Kardashian ahead of their boat ride. For the occasion, Davidson, 28, wore a beige sweatshirt and matching beige shorts with a navy jacket and sunglasses. He completed his look with socks, sandals, and a black Louis Vuitton backpack.

Kardashian and Davidson first made headlines when they were spotted holding hands on a rollercoaster at Knott’s Scary Farm in Buena Park, California. That outing came shortly after they shared an onscreen kiss for a sketch during the SKIMS mogul’s SNL hosting debut on October 9. The couple has been going strong ever since.

Though they live across the country from each other, Kardashian and Davidson have made plenty of efforts to see each other, including a recent rendezvous in Staten Island, where the couple had a romantic dinner and a movie date on December 18.

As the new year kicked off, a source recently told PEOPLE that their relationship is showing no signs of slowing down. “Kim is so into him,” the source said about the entrepreneur, who split from Kanye West last January. “Kim and Pete are both really cuddly and affectionate with each other.” “They seem more comfortable than couples who have been together a long time,” the source added to the outlet. “Kim is obviously very happy with him.”

Check Out the Photos of Kim Kardashian and Pete Davidson Here:

ALSO READ – Kim Kardashian Gets Backlash As She Posts SPOILERS For Spider-Man: No Way Home On Her Instagram Story