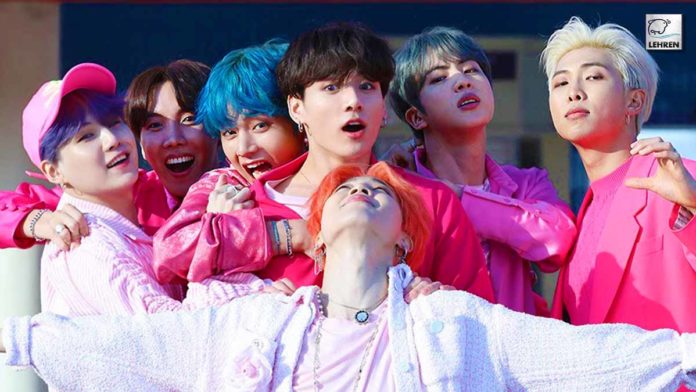 In a recent interactive game session, the boys were given a fake situation to react, about their girlfriends. Read to know more!

The latest ‘Perilla leaf’ debate didn’t spare the Bangtan boys too, as they hoped on the trend to play the interesting game. In a recent MTBI lab’s last segment, the Bangtan boys were asked a rather romantic question and their responses will surely crack you up!

For the unversed, the Perilla leaf or sesame leaf debate, is a trending question in Korea, “If your friend sees that your girlfriend is having trouble separating a sesame leaf to eat and your friend comes to her side to help her with his own cutlery would you get jealous?” When the same question popped up to the BTS members, their reactions were indeed surprising, as the boys shared who, among them, all, is the most ‘jealous’ boyfriend!

As every member shared their opinions on the fictional situation, it was Jungkook, who immediately responded that he wouldn’t let another man around his girlfriend and cannot see her with someone else. He further revealed how if he once, holds hands with his girlfriend, he will fall in love with her and even end up marrying her.

Another surprising member was V, who was next to react and totally agreed with Jungkook’s sentiments. These situations might be casual around the globe but are considered to be quite intimate in Korea, hence it’s only valid for V and Jungkook to get jealous, even thinking about it! No doubt, V and Jungkook were the only two members, who got offended even imagining a man close to their girlfriend, as other members called them the ‘jealous’ type.

ALSO READ – Pete Davidson’s Absence From ‘SNL’ Is Because Of Kim? Makers Disappointed!