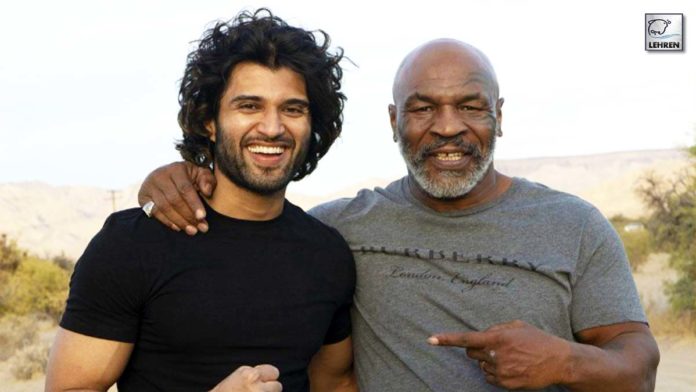 Vijay Deverakonda is making his Bollywood debut with Liger. It is the story of a Mumbai slumdog boy who aims to become a boxer. The Telugu star plays a titular role in the rags to riches story of the MMA champion. Since the movie is on boxing it has been graced by none other than American former professional boxer Mike Tyson. The famous boxer has a cameo role in Puri Jagannadh’s directorial.

Those who have seen the trailer are much aware of the cameo. Fans are eagerly waiting to witness the fight between the two legends. The trailer promises a massy entertainer starring Vijay Deverakonda and Ananya Panday in the lead. In the two minutes trailer, we got a glimpse of Mike Tyson and Vijay Deverakonda getting involved in a fight.  A scene in the trailer shows Vijay saying “I am a fighter”, to which Mike asks, “If you’re a fighter, who am I?” With this, we expect the movie will be a high-octane action drama.

Vijay Deverakonda shared an anecdote about how his mother reacted to knowing that he has to shoot with boxing champion Mike Tyson. The Arjun Reddy actor said that he was thrilled to shoot with the heavyweight champion, but his mother was equally nervous. He revealed: “She did lots of pujas and put vibhuti and kumkum on me before I left for the USA. I’m fine now and her pujas did really work (laughs).”

One of the producers of Liger, Charmme Kaur further added the actor’s mother was relieved after knowing both are having a good time on sets. Charmme added: “She kept telling him, ‘It’s Mike Tyson! Be careful’. She calls him Chinnu. She called me up millions of times and told me to take care of her Chinnu. Once they started shooting, I sent her videos of how they were chilling together and laughing as if they are childhood friends.”

Liger is directed by Puri Jagannadh and bankrolled by Karan Johar’s Dharma Productions. After the trailer release, the film piqued interest among the audience who are eagerly waiting to see Vijay fight opposite Mike Tyson on big screens. The film is shot simultaneously in Telugu and Hindi languages and is scheduled to release on 25th August 2022.