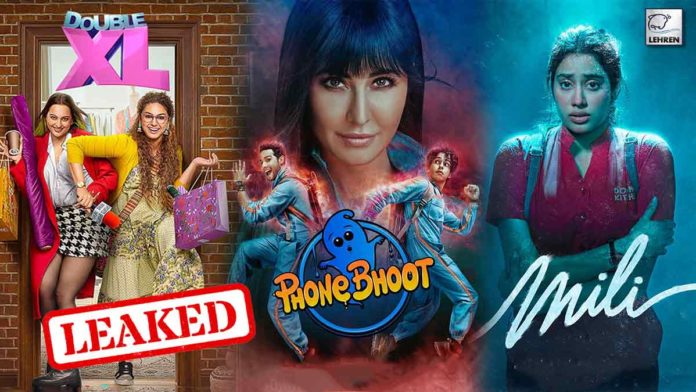 Hours after the release of Double XL, Phone Bhoot and Mili became a target of piracy and got leaked on online torrent websites.

Phone Bhoot, Mili, and Double XL were the three big films that were released today in the theatres on 4 November. Both the films Mili and Phone Bhoot opened up to positive reviews from the netizens while Double XL failed to manage to do so. However, just hours after the release all three films became a target of piracy and were leaked on torrent websites where viewers can now catch the full movie for free and in HD.

Katrina Kaif starrer Phone Bhoot, Janhvi Kapoor starrer Mili, and Sonakshi-Humar starrer Double XL were the three big films that hit the theatres today on 4th November. While both Phone Bhoot and Mili received positive and good reviews from the audience, Double XL on the other hand terribly failed to impress the audience with its storyline.

Akshay Kumar’s Ram Setu, Ajay Devgn’s Thank God, Ayushamnn Khurrana starrer Doctor G, Amitabh Bachchan’s Good Bye, Chiranjeevi’s Godfather, Hrithik-Saif starrer Vikram Vedha, and Mani Ratnam’s film Ponniyin Selvan are some of the latest films which were leaked online on torrent sites just a few hours after they were released. The issue can indeed be a topic of concern for the makers as it can directly affect the box office figures of the films. Apart from these Ayan Mukerji’s film Brahmastra was also leaked, however, the film maintained its pace at the box office and the leak didn’t affect the movie much.