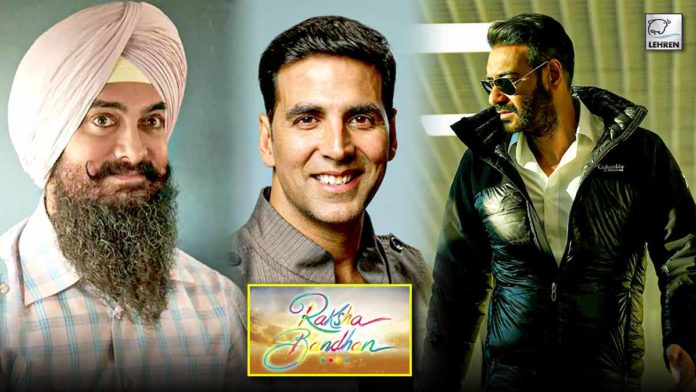 Akshay Kumar has several films lined up in a queue for this year. After Samrat Prithviraj, the actor will be featured in films like Selfiee, Soorarai Pottru, Ram Setu and Raksha Bandhan. While it seems that the actor won’t be the only one competing at the Box office, as now Akshay’s films will be foreseeing several box-office clashes this year. Check out which films will be seeing the box-office clash this year.

Raksha Bandhan will hit the theatres on 11th August, the film will star Bhumi Pednekar along with Akshay Kumar. While announcing the release date of the film on Instagram, Akshay wrote, “Bringing you all a story of the purest form of bond that will remind you of yours! #RakshaBandhan releasing in cinemas on 11th August 2022.”

Akshay Kumar’s Raksha Bandhan will be a comedy-drama film that revolves around the love and attachment between brother-sister, the film also stars Bhumi Pednekar. The film is directed by Aanand L. Rai. While this will mark the second collaboration of Akshay Kumar and Bhumi Pednekar on screen, the duo was earlier seen in the film ‘Toilet: Ek Prem Katha’.

Meanwhile now it seems that Raksha Bandhan won’t be releasing alone on 11th August as Aamir Khan and Kareena Kapoor Khan’s much-anticipated film Laal Singh Chaddha is also scheduled to release on 11th August. Laal Singh Chaddha will be featuring Aamir Khan the character of a slow-witted person who struggles with his optimism as shown in the trailer, meanwhile, along with him Bollywood actress Kareena Kapoor Khan will also be seen in the film will play the role of his lover, while Mona Singh who has collaborated with both the actors during 3 idiots will now be seen playing Aamir Khan’s mother in the film.

On the other hand, Ajay Devgn, Sidharth Malhotra, and Rakul Preet Singh’s starrer Thank God, which was scheduled to be released in July, will now be released on the big screen on Diwali and will now see a direct clash with Akshay’s ‘Ram Setu’. Directed by Indra Kumar and produced by Bhushan Kumar, the film is a slice-of-life drama that has a beautiful message layer with comedy. Ajay and Rakul will be reuniting on screen for the third time after De De Pyaar De and Runway 34. The movie also marks the first collaboration between Indra Kumar and Devgn after they worked on the 2019 action-comedy Total Dhamaal.

Khiladi Akshay Kumar’s much-awaited film, Ram Setu, is scheduled to hit the theatres in Diwali 2022. On Thursday, April 28, the actor dropped the first glimpse of the film on social media. The film is one of the highly anticipated films of the year. In the post, Akshay can be seen holding a firelight while Jacqueline is standing beside him, holding a torch. The poster also features Satyadev. All are looking up with shocked expressions. The actor will be seen along with Bollywood actresses Jacqueline Fernandez and Nushrratt Bharuccha. Akshay will also be seen sharing the screen with actress Nushrratt in his movie ‘Selfiee’.