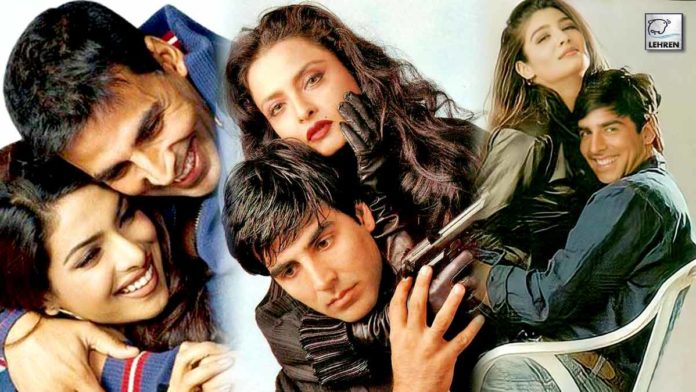 Bollywood actor Akshay Kumar is one of the biggest names in the industry. The actor has given the industry some very popular films like Hera Pheri, and Welcome among many others. However, apart from his films and career, the charming actor has often been in the headlines for some of his very controversial love affairs.

The Bollywood ‘Khiladi’ is undoubtedly a heart stealer among the audience, however, apart from his fans, the actor has stolen the hearts of some very re-known actresses in the industry. So take a look at our list of the top 7 alleged love affairs of the Bollywood ‘Khiladi’ actor Akshay Kumar-

Dhadkan actors Akshay Kumar and Shilpa Shetty have been the most talked about couple in the industry. The two created a sizzling hot chemistry on-screen and started dating each other after during the shooting of Main Khiladi Tu Anari. Things smooth throughout their relationship until Shilpa Shetty got a hunch that the actor was two-timing with Twinkle Khanna. Soon after which she decided to part ways and broke up with actor Akshay Kumar.

Another controversial couple on the list is Raveena Tandon with Akshay, the duo began dating in 1995 after they starred together in the 1994 hit film Mohra. In an interview, Raveena said that the two got engaged in the late 90s. However, the two parted ways in 1998 after Akshay was rumored about dating his co-actresses. Talking about Akshay’s loyalty Raveena said this during an interview, “We started off as friends. We got to know each other only when we went together for a few shows in America and Canada. I think loyalty meant a lot to me, but it did not mean so much to him.”

Akshay Kumar has undoubtedly been a casanova of his generation, the actor was once rumored to have dated the veteran Bollywood actress Rekha. During the shooting of one of the films from Khiladi series, Khiladiyon Ka Khiladi, the makers insisted the two grow close to each other. However, Raveena Tandon later revealed that nothing was going on between them she said, “I don’t think Akshay ever had anything to do with Rekha. As a matter of fact, he would run away from her. Akshay tolerated Rekha because of the film. At one point she wanted to get lunch dabbas for him from home. That’s when I put my foot down. I felt it was taking things a bit too far.”

Miss Universe and Bollywood veteran actress Sushmita Sen who is now dating businessman Lalit Modi was once associated with Khiladi Kumar. Yes, the two were caught red-handed by Raveena Tandon. In an interview, the actress revealed that she had once caught Akshay red-handed with Rekha and Sushmita Sen.

Another much-discussed relationship of Akshay has been with actress Pooja Batra. As per the reports, Bollywood Khiladi Akshay Kumar dated the actress and model Pooja Batra during his initial days before entering the industry. Akshay and Pooja apparently dated each other before Akshay joined the Bollywood industry. During the modeling days, both went into a relationship and later joined films. While Akshay Kumar went high on the success ladder, Pooja on the other side couldn’t quite make it.

Bollywood actress Ayesha Jhulka is also one of the actresses who have dated the Bollywood superstar Akshay Kumar. Both starred together in the film ‘Khiladi’ which was a success, which gave birth to their rumored relationship.

Hollywood and Bollywood star Priyanka Chopra is surprisingly another member of the charts. Even after marriage Akshay’s linkups and relationship rumors still went on after his on-screen chemistry with Priyanka Chopra went as a hit. Apparently, the two were rumored to have been in a relationship, and their closeness sparked the rumors of an alleged affair. However, the two never publicly admitted to being in a relationship but it went pretty obvious after Akshay’s wife Twinkle decided not to let her husband work with Priyanka. After which the two never worked together to the date.

While actresses like Kajol Devgn among others have also been an admirer of Akshay Kumar. Kajol who is now married to actor Ajay Devgn once had a crush on Akshay as revealed by her best friend Karan Johar. Karan Johar said that he met Kajol during the premiere of ‘Henna’ and at that time Kajol had a huge crush on Akshay Kumar, so she was busy searching for him throughout the party while he was helping her out.

ALSO READ: Here Are The Top 5 Fitness Secrets Of Akshay Kumar You Should Know