Kamal Haasan Charges HALF Of The Budget Of ‘Vikram’ As Fees! Read To Know How Much! 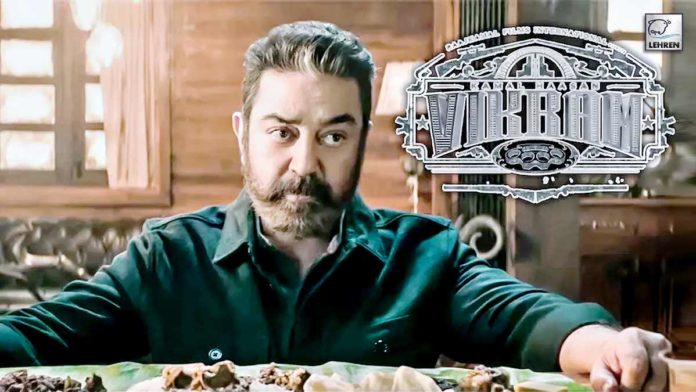 Riding high on anticipation, 'Vikram' is touted to be one of the biggest releases at the moment! Here's how much each of the cast is being paid!

Kamal Haasan is making his big bang comeback to the silver screen after almost 3 years, the legendary actor from the South was last seen in his 2019 thriller/action flick ‘Vishwaroopam 2’. Although the talks of his upcoming movie ‘Vikram’ had been around since 2020, with the makers of the film announcing a pan India release in 2020 itself, the global pandemic restricted the making of the film as the release date kept getting postponed. Finally now, with the official trailer launch of the multi-starrer movie, the Lokesh Kanagaraj directed movie is to reach cinema halls across India on the 3rd of June.

Highly anticipated by Kamal fans, the film is special for more than one reason! First, an amazing line of cast that includes sensational actors like Vijay Sethupathi and Fahadh Faasil, who’ve made their names for their top-notch acting skills over the recent years. Second, an exceptional storyline- a retired police officer Vikram sets on a thrilling mission to save a high ranking government official after being kidnapped by two siblings- a politician and a gangster.

So far, the trailer looks convincing as fans are assured that the thriller flick is sure going to be a nail-biter! Third, the film is said to have already made a profit even before its theatrical release, as the OTT rights of the film have been reportedly sold for a whopping 115 crores to one of the giant streaming platforms.

Vikram is sure a big-budget film, a recent report on the remuneration of the multi-starrer cast has been making rounds on the internet, here’s how much each of the cast is being paid for the film. Starting with the main lead, Kamal Haasan, the ‘Nayakan’ actor has been paid a whopping 50 crores for the film, fascinatingly estimated to be half the budget of the film, with the budget estimated to be around 100 to 110 crores. It is then closely followed by Vijay Sethupathi charging around 10 crores and Fahadh Faasil around 4 crores for essaying their respective roles in the film.

ALSO READ – Kartik Aaryan Reveals He ‘Knew’ Bhool Bhulaiyaa 2 Would be A Success! Here’s Why!

Except for the actors mentioned, other well-known faces like Andrea Jeremiah, Kalidas Jayaram, Arjun Das and Shivani Narayanan have contributed to the making of the film. Kamal Haasan and team are currently busy promoting the film throughout the country and also in a few places outside the country like Kuala Lumpur for its release next month. For more updates on ‘Vikram’, make sure to watch this space!