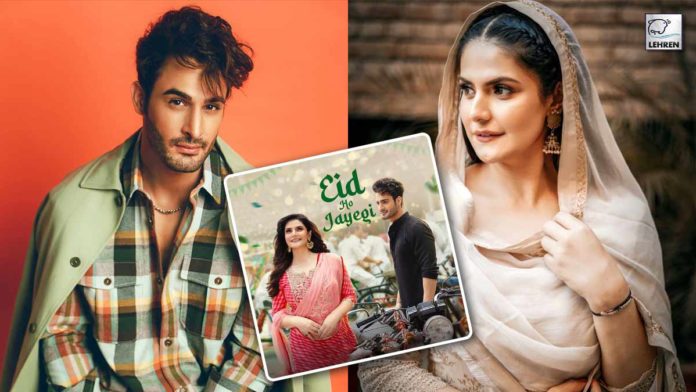 Umar Riaz and Zareen Khan's romantic melody song is out now and fans can't stop gushing about the duo.

Bigg Boss 15 contestant Umar Riaz and Zareen Khan’s new song ‘Eid Hojayegi’ song has been released today(28 April) on Youtube. The duo was seen in the romantic melody among the perfect blend of happiness and festivities.

The song created a buzz on the internet since its announcement on social media. Recently the actress shared her experience with her new music video saying, “I am extremely thrilled to be a part of something that I know will be remembered over the years”. The song was released ahead of the festival of Eid and created a buzz on the internet. The song has been sung by famous singers Javed Ali & Raghav Sachar. The lyrics of the song are given by Kunwar Juneja.
The music video is a pure romantic melody that features the actors Umar Riaz and Zareen Khan in a romantic relationship who seems to adore each other, while the music video revolves around the festival of Eid. While the fans seem to have loved the duo in the music video.

In a recent tweet, Bollywood actress Zareen Khan was seen appreciating Umar Riaz’s look in their upcoming song Eid Ho Jayegi, saying, “And let me tell all of you that he’s looking really hot … #UmarArmy is definitely in for a treat! #EidHoJaayegi.”

While taking to Instagram, the duo shared a 50-second clip from the video and wrote, “Eid Ho Jayegi, Muskura Dijiye! Full Song is Out Now Like, Comment & Share”. Talking about her shooting experience, the actress said, “We’ve had a gala time shooting for the music video, and I can’t wait to see how our fans and the audience respond to this song,”.
On the work front, Bigg Boss ex-contestant was last seen with Jasmin Bhasin in the music video “Kya Kar Diya”. While Karan Kundrra one of his Bigg Boss ex-mates was also featured in the music video “Bechari” with Divya Agarwal.