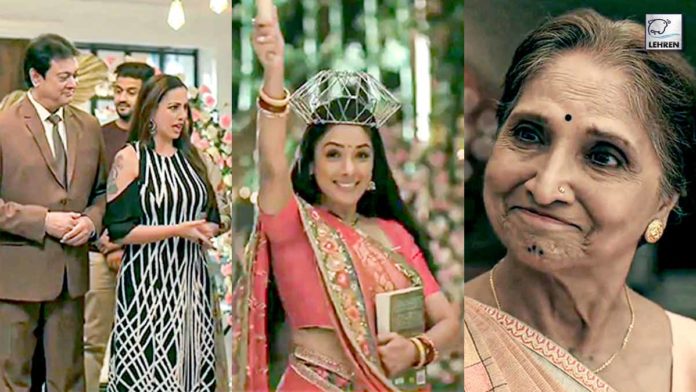 Check out Anupama: Namaste America's telly update for the 6th May 2022 episode.

The episode begins with Anupama saying to Vanraj that he conspired against her along with Leela. She says embracing motherhood is the greatest pleasure for any woman but he used it to stop her from flying. Vanraj leaves the room. Anupama stops Vanraj and says she will never complain nor she will cry over her shattered dream but the upcoming baby will keep reminding her of the betrayal.

Six months later, Shahs celebrate Anupama’s baby shower. Leela says to Anupama that it’s good that she didn’t go to America. Anupama replies to Leela that people sacrifice their dreams but she shattered them. Baa stops Leela in her way and confronts her over reminding Anupama about the USA. She says to Leela that Anupama is trying to move on and smiling but she is hurt. Baa says to Leela that one day Anupama will live her dream. Anuj lands in Ahemdabad.

Anuj Arrives In India And Wishes To Meet Anupama

Leela says to Baa that Sanjay’s family didn’t attend the function thus she invited them for dinner as they like food made by Anupama. Baa asks Leela to keep a house helper as Anupama is pregnant. Leela says Anupama will take care of the house post-delivery. Baa says that post-delivery Anupama will resume her dancing. Vanraj says Anupama will not get time as she has to raise three kids. Anupama, Baa and Hasmuk sit stunned. Leela says she will trap Anupama in household work so that she will not get time for any other thing. In the meantime, Vanraj learns he is again getting an opportunity to go to the USA. He shares the news with Anupama. Anupama says their baby is coming. Vanraj going to the US is his dream. Anupama adds she too sacrificed her dream.

Anupama vows to fulfill her dream one day so that her children can feel proud of her. Anuj comes to Shah’s house. He hesitates to meet Anupama. Another side, Vanraj, and Kavya boarded the same cab accidentally. They both decide to share the cab. Anuj finds Anupama is pregnant and cries. Anuj decides to meet Anupama someday and leaves the place. Kavya praises Vanraj’s perfume and says she is feeling relaxed. Vanraj sits stressed.