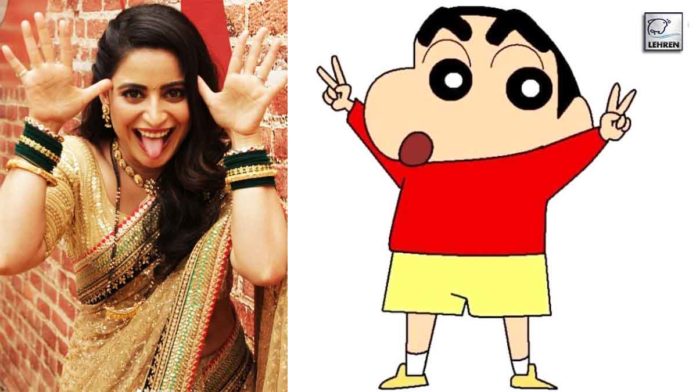 Actor Aishwarya Sharma has gained household popularity with her role of Pakhi in Star Plus’ show ‘Ghum Hai Kisikey Pyaar Meiin’. Pakhi is turning into a villain in the show due to her obsession with Virat Chavan (played by Neil Bhatt).

Though Aishwarya is always crying, cribbing and complaining in the show, she knows how to have fun in the real life. She is one of the most chilled-out actors on the sets of GHKPM. And people who follow her on Instagram would know that she is a big fan of cartoon character Shin Chan. She often posts Instagram reels that portray her undying love for Shin Chan.

Recently, Aishwarya hopped on to the viral social media trend ‘Bachpan Ka Pyaar’ and gave her own twist. ‘”If Shin Chan sang Bachpan Ka Pyaar, it would be like,” and Aishwarya started singing in Shin Chan’s voice. She wrote in the caption, “ufff Shinchan “mere Bachpan ka pyaar”.”

Neil Bhatt, who plays Virat in the show and is Aishwarya’s real-life partner commented, “mera bundle of entertainment and joy.”

And then, there’s another video of Aishwarya showcasing her love for Shin Chan. Dressed in a black top and denim, she just shakes her body to Shin Chan’s dialogue. Her madness will definitely crack you up.

She carries her love of Shin Chan to the sets of Ghum Hai Kisikey Pyaar Meiin as well. In this video, watch her and on-screen Bhavani (Kishori Shahane) creating an Instagram reel featuring Shin Chan’s voice.

And here’s another one.

Well, now you must have understood that Aishwarya is synonyms to madness and entertainment. And if you ever meet her, start a conversation around Shin Chan to hold her attention.

Did You Miss? Vikat And Pakhi’s Version Of ‘Bachpan Ka Pyaar’