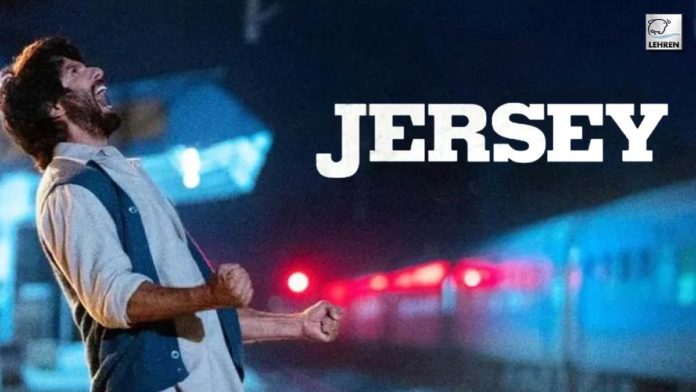 Jersey is a sports drama film featuring Shahid Kapoor, Mrunal Thakur and Pankaj Kapur. It is directed by Gowtam Tinnanuri.

It’s the last half hour that makes this long remake of a Telugu film sittable.

While sticking to the core emotions, Gowtam Tinnanuri who directed the original too, goes into small town Punjab to create an ambience vastly differently from the Nani-starrer in Telugu.

Shahid Kapoor (as Ranji player Arjun Talwar) is lucky that there’s been a sufficient gap between his film and Kabir Khan’s 83 for it could’ve been dismissed as another “cricket film”.

On the contrary, cricket provides only a backdrop while it’s up-and-down moments in a marriage and the sentiments-soaked bond between Arjun Talwar and his young son Ketan/Kittu (Ronit Kamra) that dominate the nearly-three-hour film.

It’s a bit discomfiting at the beginning as flashbacks into flashbacks and the excess use of Punjabi, especially by Pankaj Kapur as the father-like-coach, are a put-off. Like the scene when Arjun’s friends come over with an aspiring singer called Ardas Mann.

The vacillating moods of wife Vidya Talwar (Mrunal Thakur) are understandable when there’s a jobless husband at home and bills to be paid but incomprehensible when she’s fine with his indiscipline as long as he’s passionately kissing her or asking him to choose, ‘You love me or Kittu more?’ ‘You want cricket or your family?’

Arjun’s ego in not wanting to be an assistant coach even when he’s in desperate need of Rs 500 to buy his son a jersey or not opening his mouth to tell the coach that he wants the money when he’s quite willing to give him a mouthful otherwise, the coach not even comprehending his favourite player’s financial situation, are lapses in writing.

Initially, the pace of the film and scenes we’ve seen before like a cash-strapped husband taking money from his wife’s bag (eg Aashiqui 2 when Shraddha Kapoor watched Aditya Roy Kapur do the same) are worrisome.

Redemption arrives in time. The comeback of a 36-year-old cricketer to the field, urged by wanting to be his son’s hero, the ensuing problems including prejudice which has to be overcome and his wife’s demoralising, “It’s too late for a comeback” make it a fight worth taking sides.

From there until what happened to Arjun Talwar after a historic win on the field and the present his grownup son receives bring out the handkerchiefs.

Directorial details like Pankaj Kapur ageing even with his voice at the felicitation for Arjun are admirable.

Shahid Kapoor looks and enacts his part as cricketer, lover and father with impressive credibility. Mrunal Thakur also rises to the occasion as the wife with her own see-saw of emotions.   If I’m not making any reference to the cricket matches where Arjun, the country’s most scintillating batsman saves his team in the usual last-ball manner, it’s because they are not the crux of the story. So if you want to go watch a sports film, skip this. If you like emotions, never mind how long it takes to get to the point, Jersey will be fulfilling.