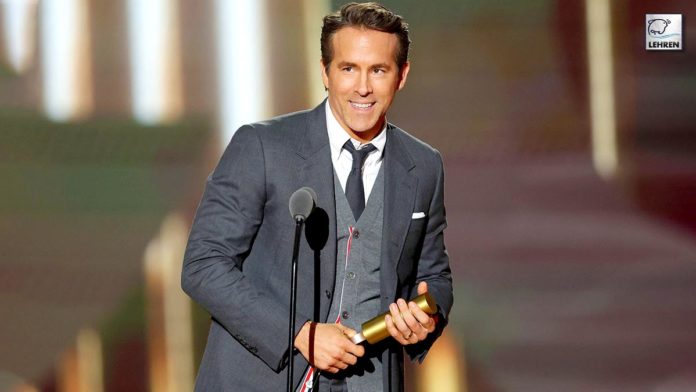 Ryan was introduced by his Free Guy co-star Lil Rel Howrey before he took to the stage at Barker Hangar to accept the honour. He thanked his three families during his speech, his original family, including his parents and siblings, his work family at his production company Maximum Effort and his ‘family,’ wife Blake Lively and their three kids, with another on the way.

Reynolds began his speech by joking, “I feel like I’m at my funeral, but I get to leave. I guess I finally tested positive for the icon. I have been avoiding it for years, but here we are.” The actor continues, “The one thing when you get a trophy like this, you don’t get one like this without a lot of help from a lot of real icons and folks who aren’t always putting their icon’s iconic energy in front of the camera.”

Ryan added, “Over the course of this long career, there are literally way too many people to mention, but I couldn’t be remiss if I did mention that it starts with my family and it ends with my family,’ he said to applause from the crowd.” He further said, “To my mom, three brothers and one of which is sitting over there and to my dad who left us a few years ago.”

Ryan then jokingly added, “Wherever he is right now, I promise you that he’s probably not watching the People’s Choice Awards. He cultivated most of his opinions through old episodes of Baywatch, so he’s probably doing that is my guess.”

The actor further thanked his family and others then continues, “People with skill sets and points of view that are wildly different than my own. I am so grateful how Maximum Effort, this company has not only changed me but leave space to change others, as well.” He concluded his speech by revealing, “I want to share the experience of working and storytelling because I see firsthand how stories are improved with wide-ranging and diverse backgrounds and points of view.”