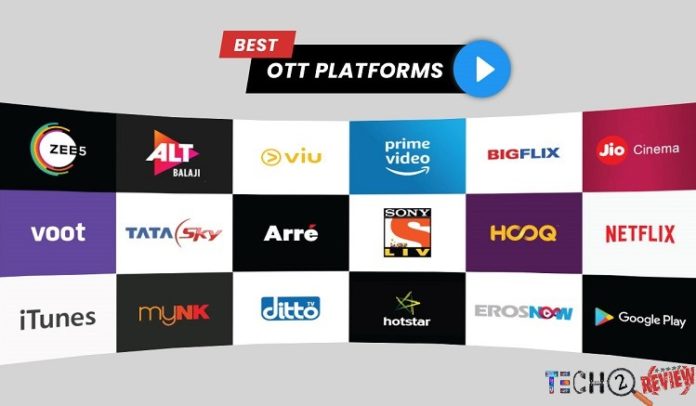 The OTT platforms are a booming industry in India. from ALTBalaji to Sony Liv here are some of the top platforms.

The OTT industry is currently on a boom all over the Indian subcontinent. India is presently one of the fastest-growing markets for OTT video, at a CAGR of 28.6%, and is expected to become the 6th largest OTT market by 2024 as per a PWC report.

The growing popularity of OTT platforms has shown that entertainment has given rise to a new era. Indian audience has varied choices to explore content as per their taste and preference. Affordability is another hindrance that OTT platforms are crossing with pocket-friendly packs and cashback offers. Here is a list of subscription-driven top OTT platforms in India and their growth trajectory over the years despite affordable subscriptions.

India’s homegrown OTT platform offers its audience 89+ Hindi original, multiple movies, and music videos spanning various languages and genres. The platform talks of expanding the reaches of OTT to the farthest hinterlands of the country, with numbers of cumulative downloads at 100+ million. ALTBalaji is one of the most reasonable OTT platforms in the country, catering to almost all sections of society. Girgit, Pavitra Rishta 2, are some of the upcoming shows on the platform. Various packs available include Rs. 300 for a year, Rs. 199 for six months, and 100 for two months.

Voot is an Indian subscription video-on-demand and over-the-top streaming service owned by Viacom18. Voot offers web series in various genres ranging from drama, romance, and comedy, amongst others. The platform has grown to 1 million paying subscribers, and 100 million monthly active users. The subscriptions costs are as affordable as Rs. 299/- a year, making it a pocket-friendly option for the audience. upcoming shows of Voot are Dexter: New Blood, The Game, Yellowjackets, and many more.

Disney+ Hotstar dominates a large section of the market with more than 100000 hours of movies and shows. With the IPL, the platform received a cumulative reach of approximately 352 million, displaying major growth from the past year. The platform offers plans starting from as little as Rs. 399/- per year. The major attraction is the continued live streaming of major sporting events in the world. Upcoming shows on the platform include Special Ops 1.5, Those Pricey Thakur Girls, and Six Suspects.

ZEE5 of Zee entertainment enterprises is another Indian OTT platform that is here to stay, offering its audience one-of-a-kind entertainment with a host of original shows. The platform has about 65 million monthly users currently. The content caters to viewers of 12 different languages and has competitive pricing of Rs. 499/- per year and 299 for 3 months. Naxalbari, Silence, Can you hear it are a few of the upcoming shows on the platform.

Sony Liv, known for being the first Indian OTT platform with content ranging from popular TV shows and movies to sports. The platform currently claims 130 million MAUs. Subscriptions start at Rs. 299/- per year with options to upgrade to Rs. 399/- or Rs. 999/- per year for more widespread content. New shows to look out for include, Scam 2003: The Curious Case of Abdul Kareem Telgi, Thinkalazhcha Nishchayam, etc.

With the growing number of smartphones and better internet connectivity, India has become a battleground for streaming services. It is now on the streaming platforms to conjure interesting and relatable content to ensure audiences’ attention and loyalty.

After The Kashmir Files, Anupam Kher Begins Shooting For A Hollywood Film