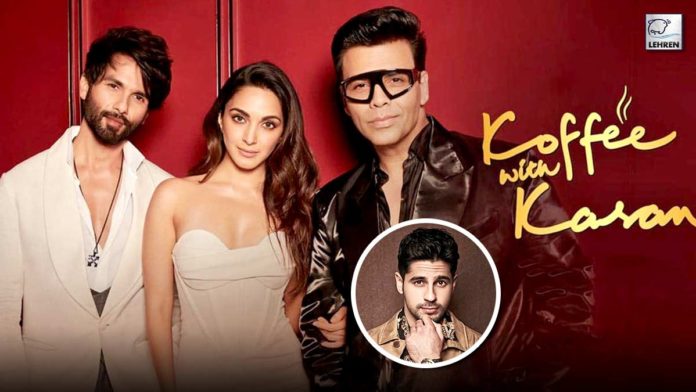 Here are the top 5 revelations made by the Kabir Singh duo, Kiara Advani, and Shahid Kapoor on Koffee With Karan 7.

Karan asked Kiara if her relationship with Sidharth Malhotra is very different from the one that is depicted in Kabir Singh. She answered, “I mean, most definitely this is a movie but coming back to the one depicted in Kabir Singh…Of course, it’s different from Kabir Singh.” Karan then asks Kiara if she’s denying her relationship with Sid, to this Kiara said that she is neither denying nor accepting the relationship. Talking about Kiara and Sid Karan adds that they would have beautiful children together.

2. Kiara Advani Talks About Where She Met Sidharth Malhotra For The First Time

While most of the episode was dedicated to the rumored love birds Kiara and Sidharth, as the Shershaah actress was seen talking about where she first met Sidharth before doing Shershah with him. Recalling the same, Kiara revealed that she and Sidharth first met after the wrap-up party of the 2018 film Lust Stories, she said, “Sid and I know each other from before we were cast in Shershaah.” Karan Johar added, “Yes, much before”, to which Kiara replied and said, “Yes at the wrap party of Lust Stories which we crashed.” KJo added, “We crashed a friend’s house, and the cast of Lust Stories as we had and Sid also came to the party and that’s where you and Sid met for the first time.”

3. Kriti Sanon Was The First Choice For Lust Stories

Lust stories is one of the projects which gave a massive breakthrough to the JugJugg Jeeyo actress Kiara Advani. While recently the actress was seen talking about doing the famous infamous orgasm scene in the film. While talking about the project Karan Johar revealed that before choosing Kiara he had a hard time finding someone to play the part.

He revealed that he first offered the part to Kriti Sanon. Karan said, “I had offered it to Kriti Sanon, the role…and she said that her mom didn’t allow her.” He added, “I thought everybody’s mom would stand in line, not allowing their daughters. It’s actually a very empowering story. It’s about a woman’s right to pleasure.”

Apart from Kiara talking about her alleged love relationship with Sidharth, the Jersey actor Shahid Kapoor also opened up about marrying his non-celebrity wife Mira Rajput, praising Mira he said, “When we got married, I was 34 and she was 20. So I had to approach it very differently. She needed to be cared for, with kid gloves. She had left everything in her life and had come to Bombay. I was very established in my space and films in general and this world of films can be very intimidating and judgemental. Sometimes, I used to feel like I know too much and I think I can tell her what to do and how to be. But I used to sometimes do it from a place of wanting to protect her. This is because I had been in that place myself. I was this kid from Lokhandwala, who at 21, did well and didn’t know how to be.”

Apart from his personal life, actor Shahid Kapoor also opened up about the failure of his 2022 released film Jersey at the box office. On being asked about his expectations and experience over Jersey’s box office failure, Shahid said, “When in December it didn’t happen, I was really thinking that should we just straight go to digital now. Because it’s really difficult to repeatedly keep creating the hype around the film, especially when all your material is out, and then unfortunately we released it in April, which was not a great month for us because there was a certain mood and a certain type of cinema which the audience was watching and we had shifted our date multiple times by the time we released, but you are still optimistic and hopeful thinking that things will get sorted but it didn’t work out like that and I feel maybe we didn’t do the right thing on the film may be the film needed to be protected.”