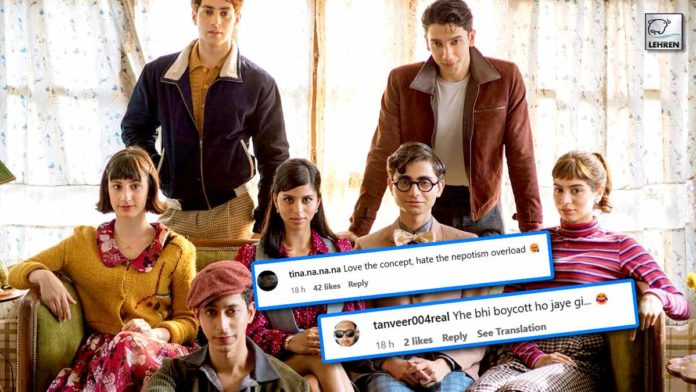 Netizens slam Zoya Akhtar for casting star kids in her film 'The Archies' after the filmmaker shares a new poster of the film. Check out netizens' reactions-

Suhana Khan, Khushi Kapoor, and Agastya Nanda are set to make their Bollywood debut with Zoya Akhtar’s The Archies. The film is an official adaptation of a famous comic story. While recently the filmmaker Zoya Akhtar shared a new poster of the film featuring SRK’s daughter Suhana Khan, Sridevi’s daughter Khushi Kapoor and Shweta Bachchan’s son Agastya Nanda with other actors in the film. Reacting to the poster many netizens were seen slamming the filmmaker for casting star kids.

On Tuesday, Bollywood filmmaker Zoya Akhtar shared the new poster of her upcoming film The Archies which will mark the debut of many star kids including Suhana Khan, Khushi Kapoor, and Agastya Nanda. Sharing the picture on her Instagram account filmmaker Zoya Akhtar wrote, “Someone asked to say Ar-cheese, Arriving soon, only on Netflix”. Take a look-

While reacting to the recently released poster many netizens were seen trolling the filmmaker for nepotism and casting the star kids, a user wrote,  “Love the concept, hate the nepotism overload,”, “Movie ka naam – Aamiro ke Lounde!”, “Nepo kids!!!” while criticizing the filmmaker for casting the star kids a user wrote, “Unbelievably disappointed! You are so much better than this unimaginative, western aping, nepotist Zoya. Of all the projects at your feet, of all the people…. !!?”

However, it’s not the first time the film became a target of trolls, earlier after Zoya Akhtar shared the teaser of the film, many netizens were seen slamming Shah Rukh Khan’s daughter Suhana Khan and Khushi Kapoor of “nepotism” and “overacting”.

The Archies is a musical drama set in the 1960s directed by Zoya Akhtar. It stars SRK’s daughter Suhana Khan, late actress Sridevi and Boney Kapoor’s younger daughter Khushi Kapoor, Amitabh Bachchan’s grandson Agastya Nanda, Mihir Ahuja, Dot, Yuvraj Menda, and Vedang Raina. ‘The Archies’, is produced under the banner of Tiger Baby Films. It is expected to release in 2023.