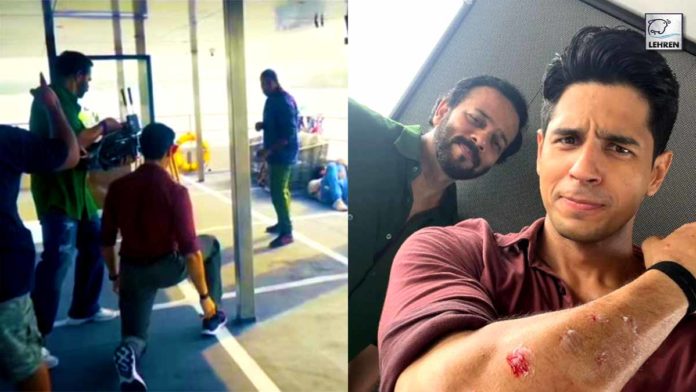 In a video, Sidharth Malhotra can be seen getting injured while shooting for Rohit Shetty's 'Indian Police Force'.

Actor Sidharth Malhotra has suffered a minor injury while shooting for the upcoming action series ‘Indian Police Force.’ Sidharth along with director Rohit Shetty recently flew to Goa to kickstart shooting of the much-anticipated project. On Sunday, Sidharth shared the first glimpse of the series and also revealed that he has been injured while shooting for an action scene.

In a short clip, Sidharth can be seen in a maroon shirt and fights with gangsters on a ferry while Rohit directs him. While shooting for the intense scene, a piece of glass broke and injured Sidharth’s right arm. However, the dedicated actor didn’t stop until the scene was done. He then realized his injury and took it in a good spirit. Sidharth also shared a quick selfie with Rohit Shetty while showing off his injury with pride.

By seeing the intense action in the first glimpse of the ‘Indian Police Force’, the excitement amongst people has increased manifolds. People are also appreciating Sidharth Malhotra’s dedication towards work and can’t wait to see him in some high-octane action after ‘Shershaah’.

‘Indian Police Force’ is an action-packed web series that will release on Amazon Prime Video. It is Rohit Shetty’s OTT debut as he adds this project to his cop-universe after ‘Singham’, ‘Simmba’ and ‘Sooryavanshi’. It will also feature Shilpa Shetty as a cop.

Sidharth Malhotra was last seen in Dharma Productions’ ‘Shershaah’. Also released on Amazon Prime Video, the film was superhit and turned out to be the best performance of Sidharth Malhotra’s career yet.