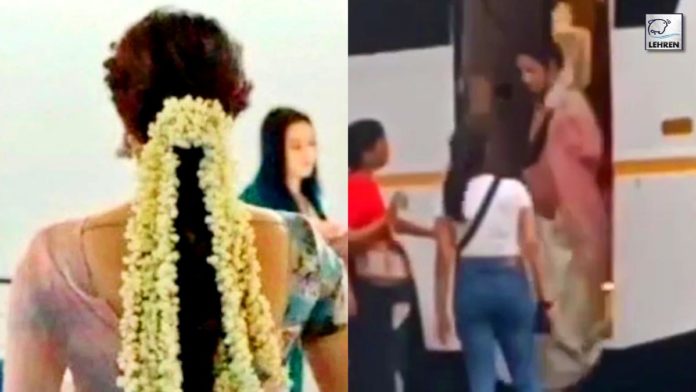 After Salman Khan, actress Shehnaaz Gill’s look has gone viral on the internet. Recently, a video has been uploaded on the internet and according to the rumours, the look is from her upcoming film. In the video, the actress can be seen wearing a beige saree with white flowers tied around her hair. The leaked videos were taken by the paparazzi while the actress was leaving her van from the sets of the film.

In the other picture, the actress posed on her back in a deep-cut floral blouse and braided hair done with flowers. The fans started sharing the pics over the internet and complimented her on her looks.

Recently, actor Salman Khan shared his look from the film on his social media account, as he wrote, “Shooting commences for my new film ….”. In the pictures, the actor can be seen wearing a black coat with a complete intense rugged look and long hair.

Shehnaaz Gill and Salman Khan were last seen at Aayush Sharma and Arpita Khan’s Eid party. They shared a hug due to which the actress got brutally trolled over the internet for being cozy and kissing actor Salman Khan, while many even said that the actress was drunk. The actors were also seen together at the Baba Siddique’s Iftaar party.

Meanwhile, after Salman Khan shared his look, the netizens have gone crazy with curiosity about his character in the film as the look itself is quite intriguing. Directed by Farhad Samji and produced by Sajid Nadiadwala, the film has Salman Khan, Venkatesh Daggubati, and Pooja Hegde in the lead roles. It will also feature Aayush Sharma and Shehnaaz Gill in key roles.