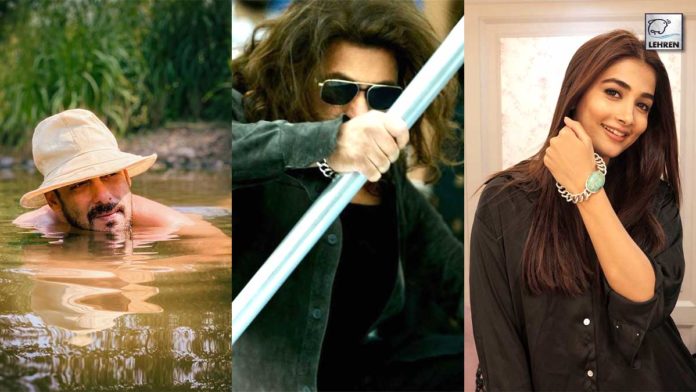 Dabangg actor Salman Khan shared a glimpse of his look from his upcoming film ‘Kabhi Eid Kabhi Diwali’. Sharing the picture the actor also stated the news of the film hitting the floors.

Salman Khan starrer ‘Kabhi Eid Kabhi Diwali’ has been the most anticipated film, while for the fans here’s some good news, as the actor recently dropped his first look from the film where he can be seen wearing a black coat with a complete intense rugged look and long hair. Sharing the picture he wrote, “Shooting commences for my new film ….”.Ever since he dropped the picture his look went viral over the internet leaving netizens all surprised and wondering about his new intense look. Many Bollywood actors liked his post while reality show host Maniesh Paul commented on his pic, “Yessssss.”

Recently, actress Pooja Hedge, who will also be seen in the film playing the lead role, shared a picture wearing Salman Khan’s bracelet as she wrote, “Shoot begins…”. The film will also star Aayush Sharma and Shehnaaz Gill in key roles.

The news about Shehnaaz’s participation in the film has been in the headlines with her fans super excited to see her sharing the screen along with actor Salman Khan.

The duo was last seen at Aayush Sharma and Arpita Khan’s Eid party. They shared a hug due to which the actress got brutally trolled over the internet for being cozy and kissing actor Salman Khan, while many even said that the actress was drunk. The actors were also seen together at the Baba Siddique’s Iftaar party.

The actor recently grabbed the headlines after he shared the Dhaakad trailer on his social media account. As after which the actress Kangana Ranaut showed her gratitude by saying, “I will never say again that I am alone in this industry”.

Meanwhile, after the actor shared his look, the netizens have gone crazy with curiosity about his character in the film as the look itself is quite intriguing. Directed by Farhad Samji and produced by Sajid Nadiadwala, the film has Salman Khan, Venkatesh Daggubati, and Pooja Hegde in the lead roles. It will also feature Aayush Sharma and Shehnaaz Gill in key roles.