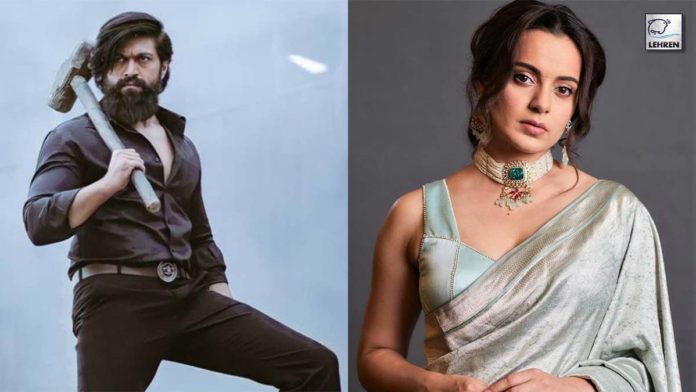 After the immense success of KGF 2, with even celebrities across all industries pouring love on the film, here's Kangana comparing Yash with a Bollywood actor, know who!

You know KGF 2 has done extremely well when even someone as critical as Kangana Ranaut is all praises for the film and the actors of the film. In a recent development, Kangana was seen appreciating the star of the movie Naveen Kumar, popularly known as Yash among his fans. While celebrities all across the industries are poring immense love on the film and it actor, Kangan too joined the club. Kangan on Sunday, put up on her Instagram stories a picture of the KGF star to support him and even said how Yash reminds her of an actor from Bollywood.

The ‘Queen’ star compared Yash with Bollywood legend Amitabh Bachchan, calling him ‘the angry young ma’ that Bollywood was missing. She even thought about how Yash completes the void that Bollywood had and that no one was able to replace Big B since then. “@thenameisyash is the angry young man India was missing for many decades…He fills that void that Mr Amitabh Bachchan left in the seventies… Wonderful.” she wrote.

In the film, Yash plays a character of a mafia, Raja Krishnappa Bairya aka Rocky. Talking about his character in the film, Yash said, “Your enemies bring out or your this thing brings out the best in you. There was one dialogue in Chapter 1, Rocky is like a fire and enemies are like petrol and the more you add fuel more the fire intensifies so that’s actually Chapter 2. Because of the strong personalities and strong characters trying to trouble Rocky so he has to be stronger, wilder and he should be mad.”

He also shared insights on the film and the pressure of performing after the immense success of the first part. He said, “We do stylised action – where you can sit and watch it comfortably. It has nothing to do with brutality or anything. We make it very presentable because I know a lot of families come to watch my films. It’s fiction and it’s more about style and presentation. I believe action has nothing to do with the stunts that are performed but why that action is being done. It’s about the reason behind those action scenes – when you have a reason, everyone would want the hero to hit someone, etc. It’s all about creating those moments on-screen which give a different dimension to that fight. Those kinds of fantastic moments are there in this film. My director has created some classy sequences – it’s madness! Every scene oozes a lot of style and attitude.”

HE also believes that his on-screen character Rocky has many similarities with his off-screen personality. “There are a lot of similarities. When the script is being written by the director, I also get involved in the process. So there are a lot of experiences and thought processes that we (director Prashanth Neel) have shared. Rocky Bhai has a very similar belief system to mine – he is focused, has aggression and is confident.” he said.