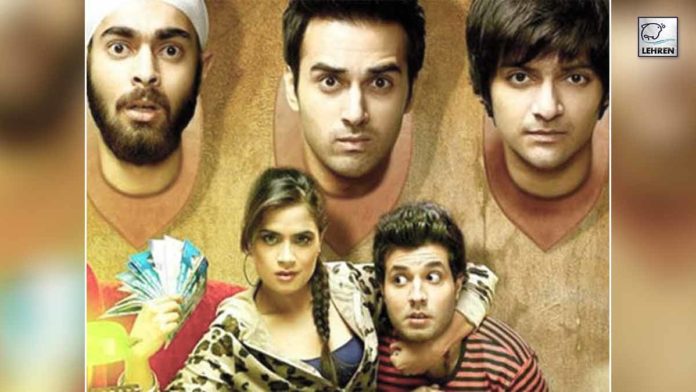 The much-awaited third installment in the Fukrey franchise is all set to start rolling. The director of the film, Mrigdeep Singh Lamba took to his Instagram to announce the news to the masses. The first installment of this franchise is a cult classic and many movie lovers enjoy watching it. Now, Fukrey 3 is all set to go on floors as the script is ready.

Filmmaker Mrigdeep Singh Lamba announced the news by sharing a picture of three books that have “Fukrey” volume 1, volume 2, and volume 2 written on it. Lamba captioned the picture, “#fukrey #volume3 Taiyyar… Agaaz.”

Actor Varun Sharma, who plays a pivotal role in the movie, shared the same image on his Twitter handle. He accompanied the image with the caption, “Oyyyiii Oyyyiii Oyyyiii!! Can’t wait. Fukrey 3 ho gayi hai taiyaar”

For the unversed, Varun Sharma rose to fame because of the success of Fukrey. His character Choocha is classic among the audiences.

Varun’s co-star, Pulkit Samrat shared the same picture on his Instagram story and wrote, “We are ready.”

The story of the film is set in Delhi and is about four friends who join hands to make some easy money.

A year back, Ritesh Sidhwani, the co-founder of Excel Entertainment had dropped a hint by saying that Fukrey 3 is on the cards.

Fukrey 3 will go floors soon and hence, the star is excited for this new venture.

The plot of the movie hasn’t been disclosed but the script is ready. Earlier there was speculation that the makers might add a coronavirus pandemic incident in the movie. However, the makers refuted the same and by claiming it as a hoax.

It will be interesting to see how the makers carry out the production work amid the COVID-19 situation.