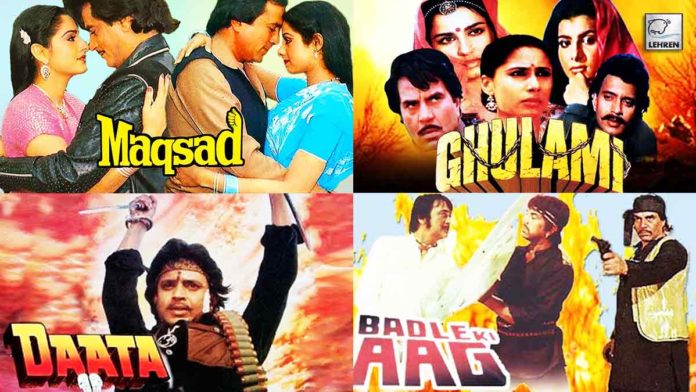 Here’s presenting a list of some of the best of 80s to help you entertain throughout the month.

The world of Indian cinema is ginormous. Over the years, Bollywood films have left a long-lasting impression on us and ask any fan, which is his favourite decade of Bollywood – the answer probably might not be easy.

he 80s generation presented us with some timeless masterpieces that have etched a special place in our hearts. The on-screen romance was the major hook point, music on the other hand, was like a cherry on top of the cake, making the films a blockbuster hit.

The subject made the creators turn to fresh faces to entice the viewers with something unique. The storylines, however, followed the pattern set by folk tales such as Laila Majnu or Shakespeare’s Romeo and Juliet. To celebrate and appreciate vintage Bollywood, Sony MAX2 brings to its audiences the spectacular line-up of 80s masterpieces that are bound to offer unlimited entertainment.

Here’s presenting a list of some of the best of 80s to help you entertain throughout the month.

Daata (1989)- 9th July at 7 PM
Daata was Mithun Chakraborty’s career breakthrough performance making his way to the world of cinema. The film centres on his character named Kundan who is a son of a respected school teacher and has been grown with good values. However, when he witnesses his father lose his integrity and eventually his life, due to the actions of a greedy man, he is forced to become a dacoit to avenge his father.

Ghulami (1985)- 13th July at 7 PM
Ghulami is known to be the milestone film in the history of Bollywood cinema for its excellent cinematography. The film brilliantly captures the social realities of the period in which it was set. The film is set in rural India under British rule. This film’s ability to connect with the audiences that faced the reality of caste and feudalism makes this film stand out. The film is bound to transport you to 80s decade in Rajasthan and its beautiful milieu.

Maqsad (1980)-18th July at 1 PM
If you are someone who loves Bollywood dance face-offs, Maqsad has to be in your watchlist. The 1980s potboiler flick is a must watch for its grand dance-off between two of the Bollywood divas Sridevi and Jaya Prada – who were arch rivals from the get-go. The fierce dance ballet that the leading ladies do – Aajao Aajao Naagraja Tum Aajao – is incredible. The fire between them is amazing and totally worth your while.

Badle Ki Aag (1982)- 30th July at 7 PM
If you are in a mood to enjoy some classical music and qawwalis, this film could be a perfect choice. The Laxmikant-Pyarelal songs are a highlight in the entire film. Actress Reena Roy dancing on the tunes of his songs adds that extra flavour to the movie. Apart from entertaining with its soulful music, the film offers unlimited fun with an interesting revenge drama featuring some dynamic Bollywood stars like Sunil Dutt, Dharmendra, Jeetendra, Reena Roy, and Smita Patil.