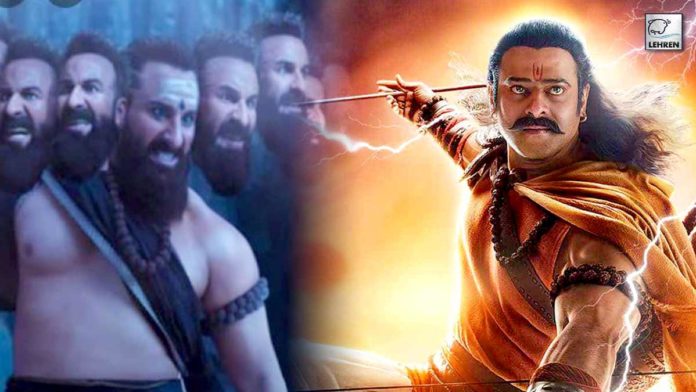 Ever since the Adipurush teaser was released it has received backlash. Netizens trolled the portrayal of Saif Ali Khan as Ravana and also called out to boycott Adipurush. People questioned the film for hurting religious sentiments by wrongly portraying Ravana. Amid such counterblast, Ayodhya’s Ram Temple priest has demanded an immediate ban on Adipurush, based on Ramayana.

The makers released the teaser on Sunday in Ayodhya, which is the sacred land of Lord Rama. Since the teaser launch, the film has received blowback for the incorrect painting of deities. Ayodhya’s Ram temple priest Satyendra Das, who attended the annual Vijay Rath Yatra demanded a ban on Adipurush for misrepresentation of Lord Rama, Hanuman, and Ravana.

Temple’s chief priest who attended the annual Vijay Rath Yatra alleges that the makers of the film have inaccurately portrayed Lord Ram, Hanuman, and Ravana and is therefore against their dignity. Speaking to the media, Satyendra Das said, “The way in which Ravana has been depicted is absolutely wrong and condemnable. Through the media, we demand an immediate ban on the film.”

He further added, “Making a film is not a crime but they should not be made to create deliberate controversies to hog the limelight.” Uttar Pradesh deputy chief minister Kesav Prasad Maurya  Brajesh Pathak also wrote, “Whatever saints have said needs attention. Movies have often hurt the sentiments of Hindus. Whenever our culture was attacked it was these saints and akharas that saved our culture. We are proud of our culture.”

Meanwhile, BJP leader Malavika Avinash too addressed the faulty painting of deities in the film. She said, “The Ravana in the photograph that I see floating around is a guy who looks nothing Indian, has blue eye makeup and is wearing leather jackets. This is our history they are representing; they cannot do it in the guise of creative liberty.”

Dipika Chikhlia, who played Sita in Ramanand Sagar’s Ramayan, too reacted to Saif Ali Khan’s look in Adipurush. She said if Ravan is from Sri Lanka so he should not look like a Mughal. According to her, a character should appeal to the audience.

Adipurush is adapted from the Hindu mythological epic Ramayana. The film based on Ramayana will have Prabhas essaying Ram, Kriti Sanon will be seen as Sita, Saif Ali Khan will play Lankesh aka Ravan and Sunny Singh will play the role of Laxman. Fans have been eagerly waiting to catch a glimpse of actors in mythological characters. Helmed by Om Raut Adipurush is produced by T-Series Films and Retrophiles. Adipurush is scheduled to release in theaters on 12th January 2023.