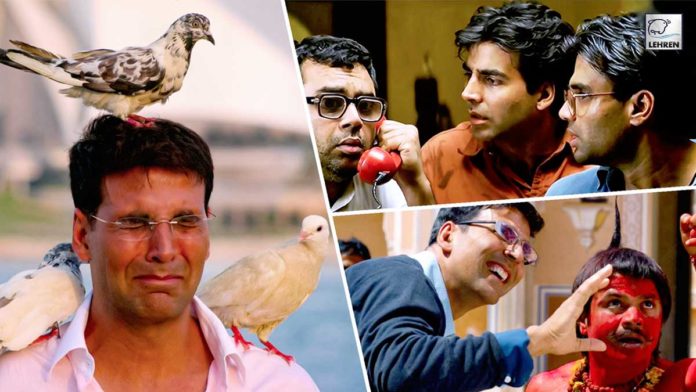 Akshay Kumar is a diverse actor but he has entertained the audience more with his comic timing in his comedy movies. In his career, the actor has been the best performer to make people laugh wholeheartedly. Take a look at all-time best comedy movies by Akshay Kumar.

Hera Pheri is a series of Indian comedy films starring Akshay Kumar, Suniel Shetty, and Paresh Rawal. The film helmed by Priyadarshan went on to become a cult favourite over time. is a remake of Ramji Rao Speaking from 1989 in Malayalam, which was based on the TV movie See The Man Run from 1971. In a survey run by The Indian Express, the movie is selected as the greatest Bollywood comedy movie of all time.

Phir Hera Pheri is the follow-up movie to the 2000 released Hera Pheri. The main cast is joined by Rajpal Yadav, Bipasha Basu, Rimi Sen, and Johnny Lever, in the second installment. The second part of the comedy franchise is directed by Neeraj Vora.

Welcome is a comedy-drama film of 2007 directed by Aneez Bazmee. The hilarious drama stars Akshay Kumar, Anil Kapoor, Paresh Rawal, Nana Patekar, and Katrina Kaif. The story takes a comic twist in the life of a man who falls in love with a girl but later discovers that her brothers are gangsters. This slapstick comedy movie definitely counts as one of Akshay Kumar’s best comedy movies.

De Dana Dan is a movie full of confusion when Akshay Kumar and Suniel Shetty find an easy way to earn quick money in order to impress their girlfriends. It takes a funny turn when they execute their plan which later fails. The comedy-drama also stars Paresh Rawal, Asrani, Katrina Kaif, Sameera Reddy, Chunky Panday, Johnny Lever, Rajpal Yadav, and Archana Puran Singh amongst others in the ensemble cast. The movie is directed by Priyadarshan.