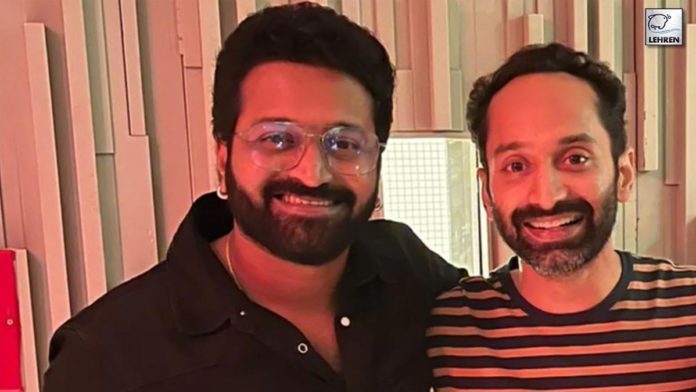 Kantara actor Rishab Shetty was recently seen hanging around with Pushpa actor Fahadh Faasil. The picture of the two is going viral.

Kantara actor Rishab Shetty is currently one of the most popular actors and filmmakers in the Kannada film industry. Meanwhile, now a picture of the Kantara actor is going viral on the internet in which he was seen tagging along with Pushpa actor Fahad Faasil. Following the picture, many fans have suggested that the South duo might be collaborating for an upcoming project.

Sharing the picture on his Twitter account, South film producer, Vijay Kiragandur “A delightful evening with the two gems! @shetty_rishab #FahadhFaasil.” The picture started rumors that both the South actors might just be preparing to collaborate on their upcoming project.

Apart from Fahadh Faasil, Rishab Shetty recently opened up about working with South actresses. During a conversation with Glute.com, Kantara actor Rishab Shetty was asked to choose between famous South actresses Samantha Ruth Prabhu, Rashmika Mandanna, Keerthy Suresh, and Sai Pallavi with whom he would like to work in his future projects.

Reacting to this Rishab said, “I decide my actors once I finish my script. I prefer working with newcomers as they come with no barriers.” Rishab further added that he would like to work with actresses like Samantha and Sai Pallavi, he said, “These actors, I don’t like them. But, I like the work of Sai Pallavi and Samantha.”

On the work front, actor Rishab Shetty is currently basking in the success of his film Kantara. Fahadh Faasil on the other hand recently appeared alongside Kamal Haasan in Vikram he will soon be seen in Allu Arjun’s film Pushpa 2.