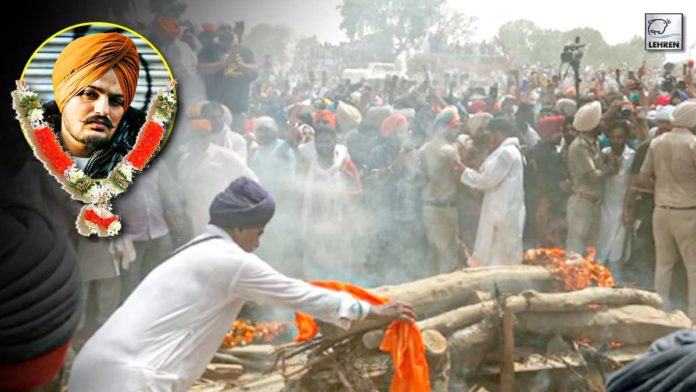 Sidhu Moose Wala Cremation: Punjabi singer Sidhu Moose Wala has left for his heavenly abode. The singer has been cremated in the presence of thousands of fans and family members at his native village, Mansa this afternoon.

Punjabi singer Sidhu Moose Wala was cremated at his native village Jawaharke among heavy security development and thousands of people who showed up to pay respect to the young artist. Earlier the day his family took his body from the mortuary from Mansa hospital after they conducted a post-mortem and handed over the autopsy reports. According to the reports about 28 bullets were pumped into the singer leaving his right hand fractured.

Later this morning, the artist’s funeral was accompanied by some relatives, Moosewala’s father received his son’s body from Mansa Civil hospital, where it was kept for post-mortem. A heavy police force was deployed outside the residence of the young Punjabi singer. In a few videos from his funeral, Sidhu’s parents were seen sitting beside the singer as they broke down seeing the dead body of their son.

The funeral procession was taken out on his favorite tractor and a trolley which was decorated with flowers. While appreciating and thanking people and fans Sidhu’s father Balkaur Singh removed his turban and folded hands among the audience.

Moosewala was shot dead in the daylight by unknown men near his house in Mansa on Sunday. His death is being mourned in India and Canada where he had lived as a student in Ontario. Meanwhile, The Delhi Police has begun questioning jailed gangster Lawrence Bishnoi in Tihar jail. Canada-based gangster Goldy Brar, who has claimed responsibility for Moose Wala’s murder, is a close aide of Bishnoi.