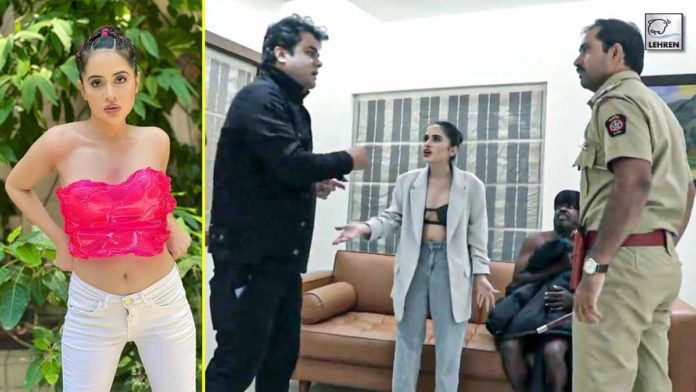 A video has surfaced online where Urfi Javed can be seen getting arrested for filming an adult movie. Know the details!

Bigg Boss OTT fame Urfi Javed has always grabbed attention with her unique yet peculiar sense of fashion, and now the actress has recently been getting the attention with a viral video.

In the video, Urfi can be seen getting caught by the police while shooting for an adult movie. The video shared by content creator Rohit Gupta on his Instagram shows Urfi in an office where she had come to meet a director for a film. Telling her that this is a secret project, the director then starts describing it to her.

He says that Ranbir Kapoor has been cast as a villain in this film while for the hero’s role they have cast a foreign actor and that Baadshah will be composing the music for this film. Then, Rohit who poses as another director arrives in the office with the actor who has been cast as the lead and reveals that he is from Uganda. Later, Urfi is asked to give the auditions with weird dialogues for her to enact. While suddenly a man dressed in a police uniform barges into the office and starts thrashing all the three men for shooting an adult film.

They blame all of it on Urfi. Urfi gets furious and then calls up her manager and starts shouting at him for scheduling such an audition for her. It’s at this point that her manager reveals to her on the phone that all of this was just a prank on her and not real. Check out Urfi Javed’s viral video:

Recently, Urfi Javed was spotted by the paparazzi in Andheri. She was sporting a neon top made of plastic. However, some fans think that she used a baby pillow as her top. She paired it with white pants and off-white heels. However, Urfi also interacts with the paparazzi. On asked when fans can watch her music video, Urfi joked, “Mera to bahut kuch aana chahiye (a lot of things of mine should come).”