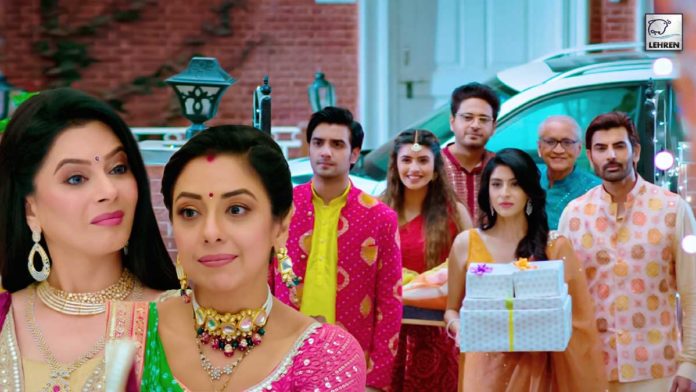 Anupama Written Update 29 June 2022: Anupama episode begins with Pakhi talking to Adhik and questioning him if he will attend the baby shower function or not. He asks her why she wants him to attend it, to which she replies that it will be fun. She ends the call with him, whereas Leela confronts her and questions the caller. Pakhi makes some excuses and goes away from there. Whereas, Anupama prays for the baby shower function and is determined to handle it nicely.

Rakhi enters the Shah house and gets welcomed by Anupama. The latter makes her wear flowers, while Rakhi taunts about it being cheap but Anupama handles it with her reply. Leela comes there and takes a stand for Anupama, which stuns the latter as well as makes her happy. Rakhi intentionally talks about Vanraj and taunts that he won’t be able to attend the function. Leela gets furious and asks Rakhi to pay attention to her daughter’s baby shower. Anupama gets nervous to handle Rakhi, Leela, and Barkha together.

Ahead, Anuj brings Ankush along with others inside the house excitedly. Pakhi gets excited to see Adhik, while Barkha mocks them for having a small house. Leela gives a befitting reply to her and states that they don’t have to call each other on phone and proclaims it to be a merit of having a cozy house. Rakhi meets Barkha and smirks thinking that it will be fun to trouble the Shahs. She waits for the drama to begin.

Anupama dances along with other ladies to celebrate Kinjal’s baby shower. They make the latter sit along with Paritosh and start the rituals. Whereas, Rakhi video calls Vanraj and shows him that Anuj is doing all the responsibilities of a grandfather. She instigates him, while he gets furious. Whereas, Leela sees it and becomes tense.