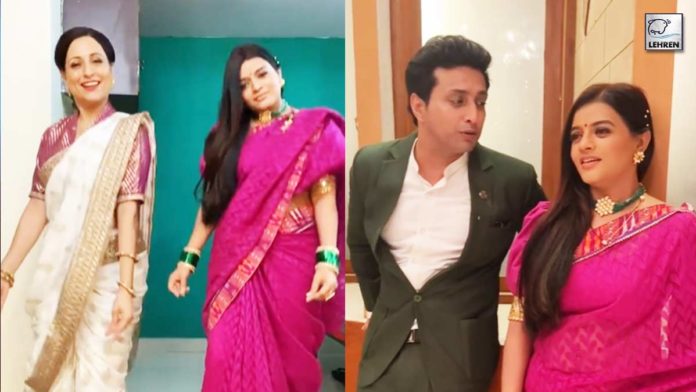 Check out the 5 most entertaining videos of Mitaali Nag aka Devyani from the sets of Ghum Hai Kisikey Pyaar Meiin.

Actor Mitaali Nag was recently in the news after it was reported that she has quit the Star Plus show ‘Ghum Hai Kisikey Pyaar Meiin’. Mitali plays the character of Devyani in the popular show. The entire cast knows how to have fun when the camera is not rolling. They often make Instagram reels to entertain their audience on social media as well.

1/5 In this video, she can be seen with her on-screen husband Pulkit Deshpande. Mitaali told that they both are good singers and therefore, attempted Ghum Hai Kisikey Pyaar Meiin title track.

She wrote in the caption, “A humble attempt by @yashpandit_official and me! It’s a beautiful coincidence I and Yash also happen to be singers. So here’s us giving you our version of the title track of the show that is ruling everyone’s heart. Big hug to @siddhartha_vankar for writing such amazing new lyrics!!”

2/5 In this video, Mitaali Nag shook a leg with cute girl Hirva Tridevi or as we know her as Devyani’s on-screen daughter Harini. They both danced to the English song ‘My Bestie’.

3/5 The third Instagram reel is very special. In this one, she dances with her on-screen mother, Kishori Shahane. She wrote in the caption, “My first reel with Aai aka @kishorishahane ji had to be something special. Couldn’t think of anything better than dancing with her on her own bollywood song which she performed with @ronitboseroy in the film #bombblast directed by @deepakbalrajvij sir. I hope I made her relive those days while she made me relive mine wen I performed on this song in my school annual day! We even managed to do the same steps here that they did in the original track!!”

4/5 Now this one is total comedy. Mitaali is playing her character Devyani, who is mentally challenged. Devyani is as innocent as she can be while she offers to cook something for her husband, Pulkit.

5/5 And in this one, Mitaali dances with her on-screen brother Mohit and sister-in-law Karishma played by Adish Vaidya and Sneha Bhawsar respectively.

Well, fans are unhappy with Mitaali’s decision to leave Ghum Hai Kisikey Pyaar Meiin. How do you feel about it?

Must Watch: Vikat And Pakhi’s Version Of ‘Bachpan Ka Pyaar’