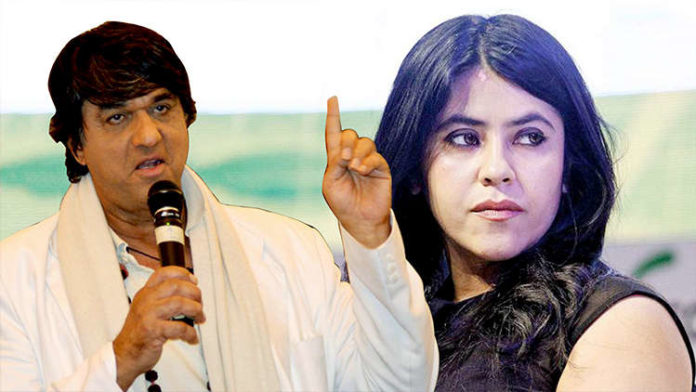 Actor Mukesh Khanna, who is best remembered as India’s first superhero Shaktimaan has been vocal about his beliefs and opinions. The actor speaks bitter truth on his YouTube channel Bhishma International and also shares many unknown facts about his shows and personal life too. Recently, the veteran actor shared his views on Ekta Kapoor’s Mahabharat where he slammed the TV czarina for ruining it by casting daily soaps actor.

Talking to a news portal the actor said, “Ekta Kapoor took Ronit Roy to play Bhishma Pitamah and they were flaunting six-pack abs, she took popular heroines to play Draupadi and other female characters. I did 15 films before bagging the role of Bhishma Pitamah. I had given a proper look test wearing a beard and a mustache. We were selected on the basis of our audition and they were elected and that’s why they did not look like the characters. She completely ruined it, satyanash kar diya tha…,”

He further made a shocking revelation that Ekta had offered him a role in her version of Mahabharat, but he rejected it, “You will be surprised to know I got a call from Ekta’s production house for her version of Mahabharat. They offered me to play the role of Shantanu (Bhishma’s father) I told them ‘Do you really think I will do Shantanu after playing Bhishma?. She made a mockery of Mahabharat. She took all the daily soap actors and tried to make Mahabharat. They were flaunting tattoo’s and six pack abs. Ekta must be very angry with me because I have spoken a lot about the kind of content she makes. I am against the way she projects women in her daily soaps,”.

Talking about playing such a crucial character in a very young age, the actor shared, “The irony of my life is when I was young I played Bhishma Pitamah and enacted Shaktimaan’s role much later in my career. I feel age is just a number and your face is what can make anyone believe what age you are. I strongly believe that girls and actors should not be asked about their age. I played the role of Bhishma Pitamah, a 160 year old man, when I was young and later when I became more mature I did Shaktimaan.”

Well, the actor has been in the industry for a long time now and has seen a major change in actors and production. Recently, when DD national announced that they’ll be re telecasting Shaktimaan amidst the lockdown the actor has become more active. On the other hand, DD National has broken all the records by gaining a massive viewership after the reruns of the old show.