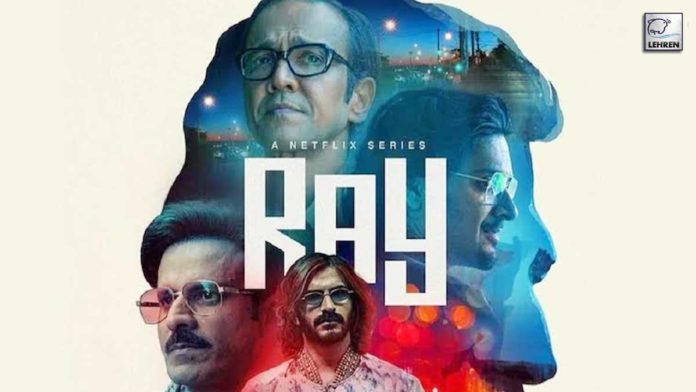 Any association with the name Satyajit Ray must necessarily come with skilled craftsmanship and a flourish of sophistication.

Happily, Netflix’s Ray, an anthology created by Sayantan Mukherjee, does justice to the much-venerated auteur with sharp story-telling workmanship.

To pick the best of four short stories is tough with Srjit Mukherji’s Bahrupiya and Abhishek Chaubey’s Hungama Kyon Hai Barpa vying for top place, a choice made tougher by the mastery of Kay Kay Menon, Manoj Bajpayee and Gajraj Rao. But I’ll give it to Hungama Kyon Hai Barpa for its poetic intrigue even while it entertains without a lull.

Say ‘Cheers’ to poetry-spouting Musafir Ali (Manoj Bajpayee) and one-time wrestler Aslam Baig (Gajraj Rao), two men from two different worlds with only a 1st class railway compartment and a bottle in common. While the wrestler-turned-sports-journalist typically uses terms like ‘Quarter-final’ and ‘Semi-final’ for the many pegs shared, the poet-singer would rather wrestle with his tunes. The cultural gap evident, it turns out the two men have more in common when a watch named ‘Khushbakht’ which can not only tell the time but also waqt badal deta hai, features in their lives. The Bhopal to Delhi train ride with halts for a mirthful encounter with Raghubir Yadav as a doctor and Manoj Pahwa as a pawn shop owner, sprinkle variety in the proceedings.

Masks are off as director Srijit Mukherji empowers all-round failure Indrashish Shaha (Kay Kay Menon) with the magic of make-up. Bullied in the workplace and in the bedroom, the effete Indrashish becomes superman with his makeup skills that equip him to wreak revenge on those he believes have wronged him, taking on even God himself. Until the power above shows him who’s the boss.

Bahrupiya is a reaffirmation of how consummate an actor Kay Kay is. Must watch just how well Srijit gets the best out of this impressive artiste.

Ipsit Rama Nair (Ali Fazal), a corporate shark with a computer brain, heads for a breakdown when the infallible memory he’s so proud of, deserts him uncontrollably. Is the brain fog simply time for just deserts?

Director Srijit Mukherji’s edgy thriller with some fine lighting provides Ali Fazal with an opportunity to swing from suave and dapper to broken and anything but beautiful. Ali grabs it and gives it his best.

Writer Niren Bhatt teams with quirky director Vasan Bala and quirkier actor Harsh Varrdhan Kapoor to present entitled and prickly film star Vicky Arora as he faces career insecurities. It gets worse when his popularity is upstaged by godwoman Didi (Radhika Madan). ‘One look Vic’, as he’s snidely called by critics, must get his mojo back when an encounter with Didi is everything that he didn’t anticipate from her.

Harsh Varrdhan is a natural as the easily-annoyed hero used to charming his way through life. Radhika goes rustic like she did in Pataakha. The one who’s outstanding is Chandan Roy Sanyal as Vicky Arora’s manager Roby. What one won’t do to bring his hero back to form, is a real slice of cinematic life.