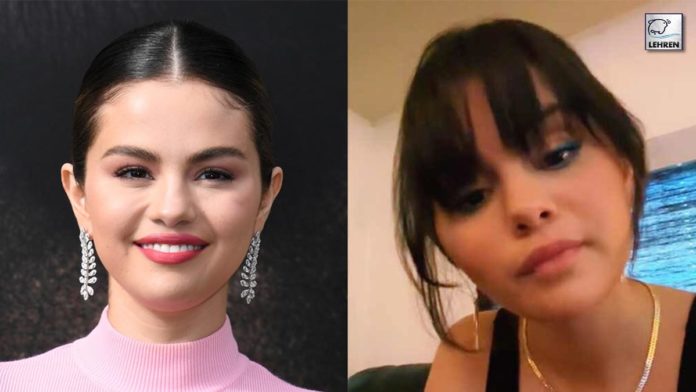 Selena, in a now-deleted video, gave insights about her dating life in the most interesting way, as she hinted about dating 'older men'. Read to know more!

Selena Gomez has never shied away from giving insights into her dating life and the ideal qualities that she looks out for in a man. Although being linked with many dating rumours, the ‘bad liar’ singer still remains in her stance and calls herself ‘single’. While there’s a possibility that Selena is indeed single, in a recent video, she was seen hinting at her ideal match as she shared the eligibility for her romantic partner.

In a now-deleted video, Selena can be seen lip-syncing to audio from Bravo’s ‘Family drama’, which is about falling in love with older men. In the clip, she can be seen enacting one of the lines from the show, an off-camera voice asks: “What is your dating range lately?” The 29-year-old Selena Gomez lip-synced in response: “31 to coffin.”

Although Selena enjoys poking fun on social media about her dating life, she has on multiple events shared how she’s content without being in a relationship. “No, I’m fine,” the singer began. “I’m totally fine being single. It’s a real thing. It’s fine.” she said. She even believes most of her relationships didn’t work because they were ‘cursed’.

“I think most of my experiences in relationships have been cursed. I’ve been way too young to be exposed to certain things when I was in relationships. I guess I needed to find what was that word for me because I felt so less than in past relationships, and never really felt equal.” she said.

“It’s just funny, because I release things that say ‘I want a boyfriend’ and stuff, and people say that, and I’m like ‘No, I didn’t mean that,'” Gomez added. “Guys are a lot of work. Every one of my exes think I’m crazy, so I don’t care.” she said.

Her relationships and health issues have taken a toll on her mental health as well. Coping with that she said, “My lupus, my kidney transplant, chemotherapy, having a mental illness, going through very public heartbreaks — these were all things that honestly should have taken me down,” she explained. “Every time I went through something, I was like, ‘What else? What else am I going to have to deal with?'”

“I’m a work in progress. There’s still so much that I’m figuring out,” she said in December. “It’s okay to be frustrated or have a hard day.” Gomez added, “I’m at the point where I’m starting to care less about what others think and more about what I feel. I also don’t read comments or [Googled myself]. People think I’m lying but I find my life to be easier that way. Life is much bigger than some little comment.” she commented during her therapy sessions.