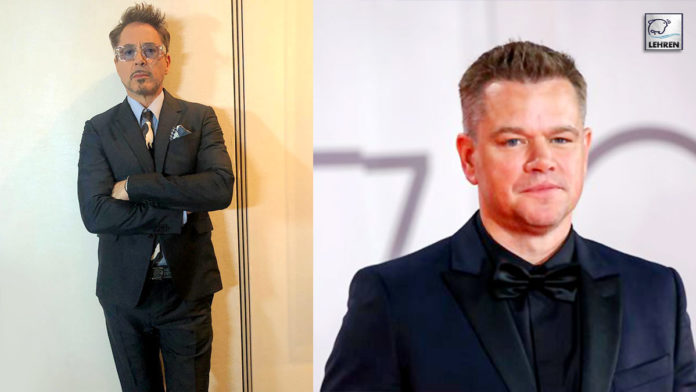 Oppenheimer is slated to release on July 21, 2023, and will follow the life of J. Robert Oppenheimer, the father of the atomic bomb who headed up the infamous Manhattan Project.

The cast of writer-director Christopher Nolan’s upcoming tentpole Oppenheimer keeps getting bigger and bigger, with Robert Downey Jr. and Matt Damon joining. however, there is no indication yet who Downey Jr., or Damon, 51, will play in the film, according to Deadline. The news comes just weeks after it was reported that Emily Blunt was in talks to star, with Cillian Murphy.

The latest project will follow the life of J. Robert Oppenheimer, the father of the atomic bomb who headed up the infamous Manhattan Project. He was among the few who watched the Trinity test in New Mexico, the first successful detonation of an atomic bomb on July 16, 1945. Just a month later, the bombs he developed were used to destroy Hiroshima and Nagasaki, which ultimately lead to the end of World War II in Japan.

Universal Pictures has given out a July 21, 2023 release date for Oppenheimer, just days after the anniversary of the Trinity test, and weeks before the bombings. As of now, it will only be going up against Warner Bros.’ Wile E. Coyote on that date, which lands a week ahead of Marvel’s Ant-Man and the Wasp: Quantumania.

Christopher Nolan will helm the film based on his own screenplay, adapted from American Prometheus: The Triumph and Tragedy of J. Robert Oppenheimer by Kai Bird and Martin Sherwin. Nolan will also serve as a producer alongside his longtime partners Emma Thomas and Atlas Entertainment’s Charles Roven. Damon previously starred in Nolan’s Interstellar, while Downey Jr. will be working with the writer-director for the first time.

However, Downey hasn’t been seen on the big screen since Dolittle hit theaters in January 2020, just before the COVID-19 pandemic that shut down theaters for months. He will next be seen in Jamie Foxx’s directorial debut, All-Star Weekend, with a star-studded cast including Benicio del Toro, Gerard Butler, Eva Longoria, and more. The actor is also attached to star in the TV series The Sympathizer and a long-awaited Sherlock Holmes 3 sequel. Damon is coming off with two movies this year, Stillwater and The Last Duel, the latter of which debuted in theaters last month. He is also slated to return as ‘Actor Loki’ in the highly-anticipated Thor: Love and Thunder, which will hit theatres in 2022.