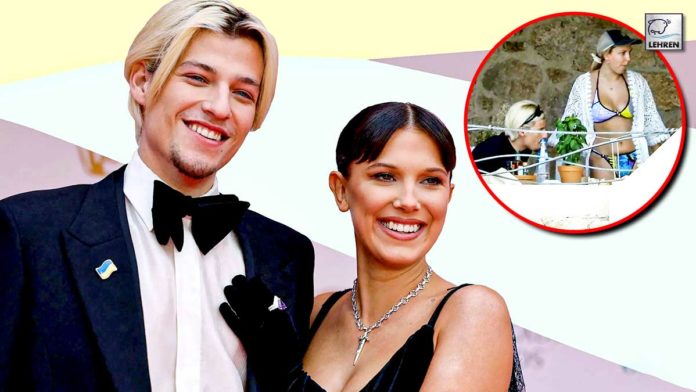 During their recent trip, Millie Bobby Brown, and Jake Bongiovi appeared comfortable and joyful as they spent time with each other.

Millie Bobby Brown, 18, looked stunning and comfortable on her most recent excursion with boyfriend Jake Bongiovi, 20. The actress and Jon Bon Jovi’s kid were pictured on a romantic holiday in a trendy purple and yellow patterned bikini as they sat at a table with what seemed to be bottled beverages on it. Her long blonde hair was tied back into a short ponytail and she wore the bikini with a white embroidered over a shirt and a black and white baseball hat.

In addition, Jake looked fantastic and relaxed wearing a black shirt and a pair of sunglasses on his head. The couple chatted throughout the excursion, exchanging grins and a few chuckles. The smitten man occasionally put his hand on Millie’s leg to emphasise their intimate relationship. Millie and Jake were last spotted outside in Sardinia, Italy, where they were vacationing, one day before their last sighting.

She was wearing an orange string bikini, while he was wearing a loose short-sleeved blue button-down shirt with daisies all over it and black Nike shorts. They both added sunglasses to their outfits, and when Millie saw a camera, she smiled, clearly enjoying the scene. The escape seemed to demonstrate how well Millie and Jake are getting along. They began dating in the summer of 2021, and since then, they haven’t held back in letting the public know about their relationship.

The Stranger Things actor took him to the fourth season premiere of the programme, and they both looked stunning while standing on the red carpet. When Millie tweeted a picture of them enjoying a tender kiss at a Harry Styles performance in London, she also expressed her affections for the handsome man. They appeared more in love than ever when they embraced one another. She wrote, “Alexa, play the love of my life by Harry Styles.”

Jon Bon Jovi is a very supportive father when it comes to the relationship between his son Jake Bongiovi and Millie Bobby Brown. According to a close friend of the Bon Jovi frontman who talked exclusively to HollywoodLife, Jon and Jake’s family adores the up-and-coming actress and is overjoyed to see their kid and Millie getting along so well. According to the source, both Jake Bongiovi’s mother Dorothea and his well-known father Jon are quite supportive of their son’s relationship with Millie.