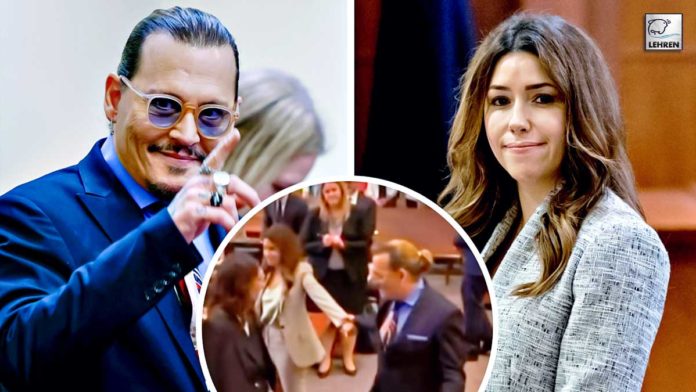 In a recent move, lawyer Camille had neither denied nor accepted dating Depp, here's an expert's opinion on their courtroom romance!

Camille Vasquez, the attorney who’s been defending Johnny Depp in his ongoing legal battle with estranged wife Amber Heard has been receiving a lot of attention these days. The 37-year-old has become an internet sensation within a couple of days, gaining fans because of her strong personality, especially after her cutthroat cross-examination of Amber a few days back. Since then, fans are not just curious about the trial, but also about what happens beyond it!

For quite some time, fans have been linking the glamourous lawyer with her client, Johnny Depp and have accused the two of being involved romantically. Many even declared the two are dating already, as their relationship looks more than just professional. Their unconcealable chemistry is just visible, with fans admitting that they can sense a ‘flirtatious’ vibe in the air, between the two.

On Tuesday, after their trial, Depp and his team with Camille were seen heading out of the courtroom, a reporter decided to prick the bubble and ask Camille about her relationship with Johnny. “The people want to know, are you dating Johnny Depp?” asked the reporter. Camille chose to not reply to the question, as she simple walked off, with a smile on her face. “It’s all over the Internet. Can you set the record straight? Yes or no,” the reporter asked again, this time too, the lawyer chose not to respond.

Despite the silence, many assumed that there is something cooking between the two, as the lawyer kept blushing throughout the video. Not just this, it’s their body language in the courtroom itself, that has urged fans to think this way. Contrary to the rumours, body image expert James Judi revealed how Johnny and Camille’s sweet exchange during the trial is nothing but manufactured in an attempt to make Johnny look more ‘heroic’ and ‘likeable’.

“It looks flirtatious but that’s probably the point, If a picture paints a thousand words, these ‘words’ look straight out of the pages of [romance publishing company] Mills & Boon. Her behaviour in court places Depp back in the role as the romantic hero,” James further theorized. “For Depp’s loyal fans, these dramatic rituals will seem like validation. ‘If this smart, beautiful woman thinks he is OK, then maybe he is’ will be the implied message.” he said.

Not just Camille, even Depp has been reciprocating Vasquez’s affectionate gestures, by pulling out a chair for her or whispering in her ear. The body image expert revealed how these were deliberately practised for the sake of cameras, so that Depp’s actions would help him come across as a more ‘gentle’ and charming’ person, as against Amber’s accusations on the stand, which rather describes Depp as an ‘erratic’, ‘abusive’ and ‘violent’ person.

Be that as it may, fans have been rooting for Depp and Vasquez, as they continue to extend support to Johnny Depp in his legal battle. For the unversed, Depp is suing Heard for defamation over a 2018 Washington Post op-ed that the actress wrote, in which she said she was a victim of sexual violence.