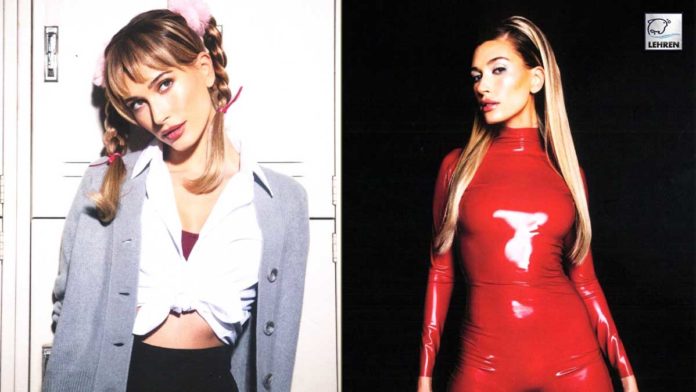 The runway model went back in time started with a recreation of the look for Britney's Baby One More Time music video as she celebrates Halloween.

Hailey Bieber stunned her Instagram followers on Saturday as she recreates multiple Britney Spears Halloween costumes. The ambitious endeavor resulted in four tributes to the pop star’s influential looks stretching from 1998 to 2001. The 24-year-old model embodied the high-profile pop culture moments, ranging from Britney’s best music videos to her classic Rolling Stones cover. Hailey’s travel back in time started with a recreation of the look for Britney’s Baby One More Time music video.

However, Hailey spared no detail as she posed in front of a set of lockers in the signature grey sweater, white button-up shirt, and pigtails secured with soft pink fuzzy scrunchies. The runway star even added a binder and pen as props for the themed photoshoot, echoing the famous first scene of the video when Britney anxiously taps her writing utensil as she waits for the school bell to ring.

The runway star also made sure not to cut corners and nailed Britney’s blended look of youth, innocence, and boredom. The wife of singer Justin Bieber also donned short gifs incorporating movement to extend her portrayal of the songstress. She also took to Instagram stories to give fans to treat with some more snapshots of the ensembles. A full-body photo of the catwalk goddess was posted, showing off the bottom half of the legendary look from Brit’s debut single. It showed Hailey in a figure-flattering black mini skirt, knee-high socks, and chunky black shoes with a silver buckle.

The Who’s In My Bathroom? YouTuber continued her walk down memory lane while nailing the hitmaker’s body language as she struck familiar poses in the skintight one-piece. Finishing the look, Hailey’s frosty blonde-highlighted hair was styled in a side part as the sleek, straight locks extended below her chest. Next up was the controversial 1999 Rolling Stone cover shot by David LaChapelle, in which an 18-year-old Britney Spears clutched a curly-corded white phone in one hand while snuggling a purple Teletubby.

The siren recreated the look, lying on a hot pink satin sheet in white boy shorts with a black polka dot pattern. She’s dressed in a lacy black bra and an opened white shirt as she stares at the camera with a come-hither look. Hailey showed off brunette bangs as her long hair flowed out behind her head. She captioned the post, “Happy Halloweekend 👻 the first concert I ever went to was the queen @britneyspears and I’ve been shook ever since,” adding several pumpkin emojis.