When Aishwarya Rai Attended A Party Wearing Sindoor In 2001 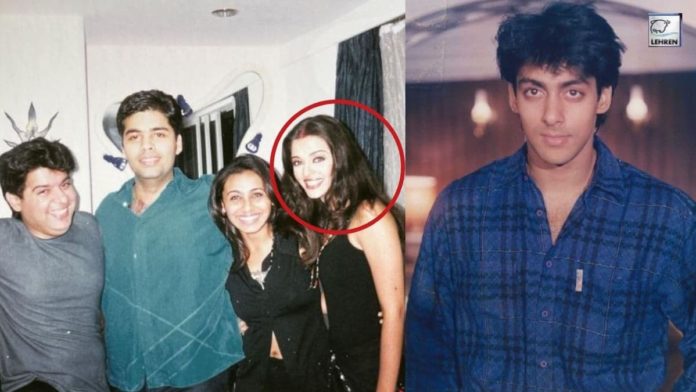 A picture from the year 2001 has surfaced online where Aishwarya Rai can be seen wearing Sindoor at an intimate party.

Being a public figure, Aishwarya Rai’s love life is known to everyone. The actress is happily married to Abhishek Bachchan since 2007. However, the actress is often remembered for her brief relationship with Bollywood superstar Salman Khan. Aishwarya Rai and Salman Khan fell in love while shooting for Sanjay Leela Bhansali’s film ‘Hum Dil De Chuke Sanam’. They started dating in 1999 and ended their affair in 2002 on a bitter note.

A throwback picture of Aishwarya Rai has surfaced online where the actress can be seen sporting sindoor. The picture dates back to the year 2001 and also features Rani Mukerji, Karan Johar, Sajid Khan and Farhan Akhtar. It was an intimate party hosted by choreographer Farah Khan at her house where Aishwarya made an entry wearing a black outfit and sindoor.

While fans wondered why Aishwarya wore sindoor while dating Salman Khan, choreographer Farah Khan gave the reason behind it.

Farah took to her Instagram and shared the picture. She wrote in the caption, “housewarming 2001 at the first home I bought.. p.s- Aishwarya Rai had come straight from Devdas shoot, thus the sindoor.. n rare pic of Karan Johar in non-designer clothes.”

This throwback picture has refreshed some beautiful memories among the stars. Karan Johar commented, “Oh my god!!!!”

Veteran actor and chat show host Simi Garewal wrote, “LOVELY!!! All so slim (‘xcept one!) Wish it was a selfie so we cud see u too!”

In 2001, Aishwarya Rai was shooting for the film ‘Devdas’ alongside Shah Rukh Khan and Madhuri Dixit. It was also directed by Sanjay Leela Bhansali. A year later, the film was released and was a commercial success at the box office. In the same year, Aishwarya ended her relationship with Salman, alleging that Salman was violent and physically assaulted her.

Aishwarya Rai and Abhishek Bachchan recently celebrated their 15th marriage anniversary. The couple is blessed with a daughter named Aaradhya, who is 10-years-old.

Must Read: Here’s Why Aishwarya Rai Refused To Do A Role In Kuch Kuch Hota Hai