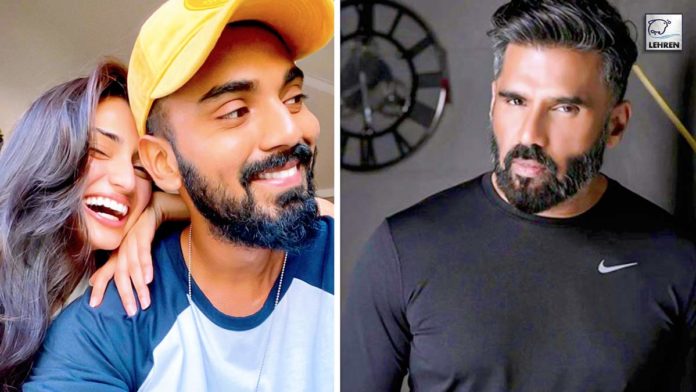 With Athiya Shetty and KL Rahul confirming their relationship, throwback to the time when Rahul had admitted to arguing with father Suniel Shetty for this reason!

Athiya Shetty and cricketer KL Rahul were only rumoured to be dating until the couple decided to make their relationship official and declare love for each other publicly. It’s not a secret anymore that the duo is madly in love with each other, their mush Instagram pictures speak for themself. While sharing the equation that the 30-year-old cricketer shares with his girlfriend’s father, Suniel Shetty, he shared how the two of them argue about one topic.

Sharing about Suniel’s cricket knowledge, he said, “No, I don’t think so. And he’s not just a fan. He understands the game really well, he’s borderline obsessed. We do have some conversations and arguments. He talks sense every time because he understands the game. ‘You’re not fit enough, you’re getting injured, you’re not eating healthy.” he also shared how not just Suniel, but his girlfriend’s whole family shares a very beautiful bond. “He’s all about the healthy lifestyle and training. If you look at 60, he is as fit as anybody else. If he can do it at 60, I don’t see why I can’t do it.”

“Like they say, you attract the right people around you and somehow I have. I like what is going on in my life. It’s very simple, exactly what I want.” he said. Not just him, even Suniel Shetty in the past had opened up about his views on the couple. “As far as the ad goes I mean it is an international brand and they chose to take the two of them as ambassadors. I think they look brilliant together. They are a good-looking couple, na? So, it totally works from a brand perspective. And I must say, they look good together, well, in the ad (laughs!),” he told.

With Rahul’s birthday yesterday, Athiya had shared a cute post on her Instagram handle. From picking up boyfriend Rahul at the airport to sharing breakfast together, the couple is sure to paint the town red with their romance. Recently the actress shared a post t celebrate Raul’s 30th birthday with a caption that read, “Anywhere with you, happy birthday,”

Rahul once shared an interesting story on the origin of his name, he said, “Her story was that she was a huge Shah Rukh Khan fan and his characters in the 90s were Rahul, right? So, I used to go with that story. I told one of my friends. who watches probably a lot of Bollywood movies, and he said, ‘Bro, Shah Rukh’s first character as Rahul was in 1994. You’re born in 1992. So, it doesn’t make sense’.”